Today’s blog is all about the cranium, ladies and gentlemens, and since Jacelyn’s the one with the most knowledge on the subject (and also has the prettiest one ever made), she will providing the bulk of the info today.  (As usual, all of Jacelyn’s words will be in italics, so as not to confuse her brilliance with my lunacy.)

Brand of sunglasses does not matter!

“Though it is shown to be important for us to protect our eyes from UV damage by wearing sunglasses (repeated UV exposure can degrade the retina), don’t fall for advertisements that claim that their brand of sunglasses is better!  High tech experiments have been done in state-of-the art research labs that demonstrate that sunglasses costing $2 filter out the exact same amount of UV rays as those costing over $2000.”

Now that Jacelyn has saved us thousands of dollars, let’s move on to fashion.  Most of you know that Jacelyn always dresses cleanly and appropriately, with a hint of Disney Princess flair; what you may not know is that she also has a small gangsta thug streak about her.  That is why I wasn’t at all surprised when she burst through the door, announced that she’d found a head covering she wanted, and showed me a picture of the largest trucker hat EVER: 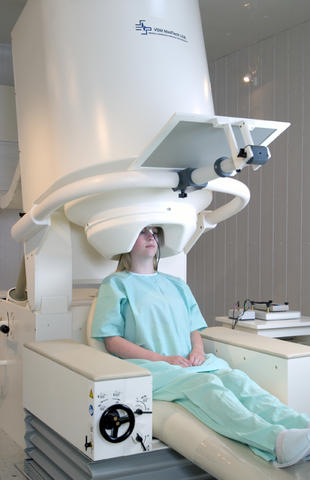 I especially love the bill on the front.  Speaking of bills, you’ll be receiving a letter soon, asking for the necessary funds to buy a matching set. (Just pray about it)  Next up we’ll take on the Book of James as we try to tame this one:

(While I dry heave, Jacelyn will expl…….) This condition is called “Hairy Tongue” and it definitely looks like a hairy tongue, but it is actually overgrown filiform papillae, which are projections on our tongue.  They don’t contain any taste buds and are mostly present to catch and scrape food for us.  Now, if you’ll excuse me, I don’t have time to give any more details than that–my final is in two weeks 🙂

…read THIS while I get some Sprite and chicken nood……….

Okay, I’m back.  I hope you enjoyed the trip through head and eye protection and sick and twisted tongue issues as much as eye did. (pun)(I always feel the need to point out puns.  They’re funny enough as it is, but when you point them out, I think it makes the punnier) (pun).  All last week, I was given the amazing privilege of speaking at a different church in our deanery every night as a part of a youth Lenten retreat.  The week culminated on Saturday at a youth rally for the whole island, where over 800 youth attended!  I truly couldn’t believe that I used to be concerned about whether or not I’d get to do any ministry during our time here (silly Nic).  The event on Saturday began at 10am with a processional through a town called Mahaut (pronounced MUH-ho).  Maybe you’ve been on a processional before, but I hadn’t.

I had no clue what was going on as we all gathered in the middle of The Road, halfway between Portsmouth and Roseau.  Soon after we gathered, live worship music started blaring from a pickup truck stacked high with huge speakers and the 800+ youth and leaders started singing and walking through the streets of town.  This is a picture of the beginning of our walk:

Then we began climbing a hill to a playing field at the top, where the rally was held.  Here’s us on the way up: 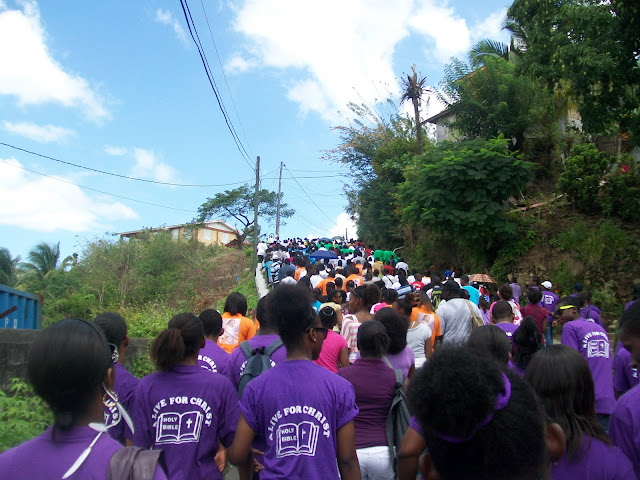 (Feel free to play “Where’s Whitey”) I just couldn’t believe I was able to be a part of it!  And, lest I forget WHERE I was, in the middle of the rally, while we were taking time to pray about how the Bible is “a lamp unto my feet and a light unto my path”, a massive, perfect rooster walked by.  Classic Dom.

Then, to top the weekend off perfectly, we attended the Palm Sunday  service in Portsmouth, which began with…..yes, you guessed it…..a processional!!!!  Beginning at 7am, we marched through the quiet streets of our little town, singing the old school songs like “Lift Jesus Higher” (yes, in case you were wondering, there WERE multiple roosters singing with us).  It was great because we sang and sang and kept singing as we walked in the front doors of the church and our singing became the processional hymn.  It was beautiful.  Thank you all for tuning in!

On to the next processional…

Phew!  Well, that’s all done.  Since December 13, life has been a constant flurry of activity.  We travelled to Duluth, travelled back to Dom, Jacelyn’s parents came, Jacelyn’s parents left, we got ready for 2nd semester, I went to Minnesota for 19 days, I came back to Dom (bringing two friends with me from Eau Claire), they left, the 20-person mission trip came, they left, our good friend Johnny came, he left, I slept 9 hours and sat down to write this blog.  See.  Flurry.

Because so much has happened since I blogged in broken sentences about our Christmas break, I’m going to move on.  With one exception.  I want to explain “The most expensive ham on earth“.  For Christmas, I made the trip down to Roseau to purchase a frozen 10-lb turkey, which cost me about $60 U.S.  I expected to pay that much.  In fact, since the turkey is only native to North American Forrests, basically anywhere you go on earth, besides America’s imminent neighbors (“eh” and “que”, as I like to call them), you will have to pay through the beak to get turkey in any form with which you’re familiar.  When we were in China, we had to go to a back alley at the back end of a dark and dingy neighborhood to get turkey from what our friends called an “import store”, but we’d affectionately termed “The Crack House”, both because it looked like somewhere you’d buy crack AND because the walls were structurally un-sound.

Anyway, in Porstmouth (our town) we have an IGA grocery store, where most things are overpriced because, again, they’ve been shipped there on the open seas.  While Jacelyn’s parents were here, I made a journey there to pick up a couple of last-minute ingredients and, out of curiosity, I wandered over to the chilled meats section to see what they might offer, at which point I found the most expensive ham on earth.  There, in the glass case, lay a maple and brown sugar ham much smaller than THIS one.  The major difference between the two was that the one I just showed you is listed as $37.25, whereas the less-than-four-pound turkey I saw was priced at $125 u.s.!!!!!!!!!!!  Yes, U.S. dollars.  The Eastern Caribbean Dollar price was $333.75.  So, needless to say, we stuck with over-priced turkey this year.  Maybe someday, when we’re rich missionaries in a third-world country, I’ll be able to afford a ham of that low weight but high quality, but for now, I’m okay with eating things that naturally grow here, like Coca-Cola and KFC.

There are no trips or visitors planned for the next two months, so my goal is to blog on a more regular basis.  Life has been busier here than it was in Duluth, believe it or not, and I’ve really struggled to find a routine, what with all the visitors, details, and full moons.  However, I have recently been introduced to a time-saving method called The Pomodoro Technique.  At first, I thought the same thing you probably just did–that it has something to do with fighting bulls–and dismissed it because bull interaction would just be one more thing on an already-too-long list.  But, after a giving it some thought, I looked into it, and let me just say that, as simple as it is, it has changed my time management completely and has drastically increased my productivity.  I won’t waste time here telling you about it (that’s one part of the technique, and I only have 15 seconds till my pomodoro is done), but you can click HERE to find out more about it. (Okay, the infomercial is officially over)

The tidbit from Jacelyn this week comes as an addition to last week’s David and Goliath factoid.  Turns out, there’s one more possible explanation for the details of what happened on that fateful day.  There is a condition known as “Bitemporal Hemianopia”, which is usually referred to as “tunnel vision”; this can be caused by a pituitary adenoma, which is a tumor on the pituitary gland.  When someone suffers from this condition, not only is their vision affected, they can grow to unusual heights.  The tumor is located in the pic on the right and effects vision as portrayed by the pic on the left:

The reason you can become a giant with a pituitary tumor is because the pituitary gland helps regulate the amount of growth hormone given to your body.  The tumor could make it over-stimulate the growth hormone, which brings us to Davey and Goley:

Allow me to draw your attention to the pic on the right.  Meet Yao Defen.  Please take note of the layout of the picture and the two happy, yet frightened, Chinese doctors hold her hands.

In closing, I’d like to give you a few highlights from the mission trip.  They had a great time and we were very thankful that we were able to keep 20 pale Minnesotans safe for 8 days on the island; in fact, I think we used fewer than 10 band-aids the whole time!  Below are some of the better pics.

We were able to thoroughly clean about 3 miles of The Road on clean-up day.  This is the group when we finished:

This is how much trash we collected and then distributed to the various front porches of people who’ve made me mad since we’ve been down here:

While we were working at the elementary school in Roseau, Kevin and I were able to meet someone whom I at first mistook for one of the many mythical creatures that inhabit this magical island.

Meet Garth Joseph, former player for the NBA and current basketball coach for multiple teams around the Caribbean.  This picture was taken as I was counting to five, Kevin was counting to ten, and Garth was in the process of slamming our heads together.  T’was a beautiful moment, the paramedics said.  (I always say that Kevin is the Asian version of me; well, in the preceding pic of Yao Defen, I think we found the Asian version of both of us!)

Actually, we were SUPPOSED to just be helping them with their vegetable garden; the searches were impromptu and apprently initiated by the confident guy on the left, who is aspiring to work for the TSA someday.

Well, that’s enough for today!  Thank you all for your patience and your continued readershipness!