Learning to do stitches—on a pig foot. Yes, a real pig foot.

Jacelyn has known since she was ten years old that she wanted to be a missionary.  While living as a teacher in China, she got the opportunity to travel to Cambodia.  After spending a heart-warming afternoon with some local children, Jacelyn had a clear “lightbulb moment”; God was calling her to be a medical missionary.

Jacelyn has now completed her first two years of med school and Step 1 of the USMLE (U.S. Medical Licensing Exam).

The first two years are called the “Basic Sciences”.  During this time, students learn about the normal structure and functioning of each body system, followed by a study of the illnesses and malfunctioning associated with each body system—along with pharmacology, immunology, microbiology (bacteria, viruses and fungi), anatomy lab, clinical labs, hospital shadowing, and the most difficult tests she’s ever encountered.

Then it was time for 3 ½ months of intense studying for the USMLE, a test one of her professors described as “one of the hardest tests ever given to humans under any circumstance.”  Jacelyn concurs with that assessment.

Now she has moved on to the “clinical years” of medical school.  Her last two years will be spent in hospitals, putting her knowledge into practice and learning the ropes of being a physician. 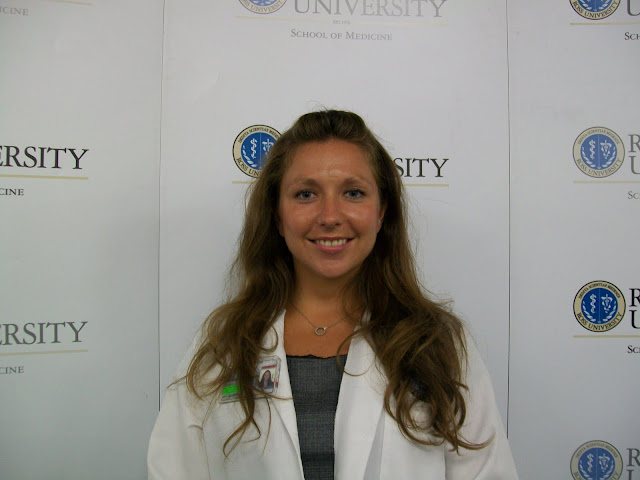 At the White Coat Ceremony, which welcomes med students into the medical profession