RSS Feed
← And the Oscar Goes To…
VI: A Journey of a Thousand Journeys Begins With a Single Journey →

Chapter I:  It took 7 months to figure out how adoption works in Dominica.  Most importantly, we learned that we needed to identify a child in need of adoption on our own.

Chapter II:  Nic walked into a coffee shop and heard the words, “I found kids for you!” Two days later we met two women in need of a home for their children.

Chapter III:  The next morning, both women said they would like us to adopt their children. We were faced with a rather impossible choice: two sisters or little Jonathan . . .

Chapter IV:  In the end, however, that decision was made for us; the father of the two sisters made it clear that they were no longer interested in pursuing an adoption.  However, the mother of that dear little boy named Jonathan was interested, and we immediately began scheduling appointments . . .

The first step in the adoption proceedings was to meet with a Dominican social worker.  We had confirmed this meeting with Jonathan’s mother on a Monday, and we waited on pins and needles all week until the Friday appointment.  We had only met her one time, and we couldn’t yet be sure how interested she actually was in this adoption.  We didn’t even know if she’d show up for the meeting.  A Thursday night phone call reassured us that she was still coming, but the flutter in my stomach couldn’t relax until we actually saw her on Friday.  Nic and I had so little control over the how the next steps of the adoption would progress—it was greatly dependent upon Jonathan’s mom . . . But, to our great joy and relief, Friday morning brought Jonathan and his mom to our house right on time!

In addition, amazingly and unexpectedly, their arrival brought us far more than relief; it brought us another little boy who was to instantly occupy our hearts.  Sitting in the van with Jonathan and his mother were two other children.  One of them was Jonathan’s three-year-old sister, whom we had met along with him last week.  The other child was six-year-old, Miguel, whom we had never even heard of.  The mother simply said he was one of her children.  Immediately our attention was piqued!  After all, we’ve always wanted to adopt siblings, and we couldn’t help but think this might be a possibility with Miguel . . . With exciting new prospects in our minds, we made the one-hour drive to Roseau (the capital city, where all our appointments were held), holding Jonathan in our arms and sitting next to Miguel.  Miguel climbed into the front seat with us to get a better view.  He had never made this trip before, and was absolutely mesmerized.  He pointed out every big truck we passed as well as every boat, by shouting in his thick, Dominican accent, “Look dee boat!”  Though we dreamed of it, this process was just in its infancy, and we truly had no idea that this moment was a snap shot of our future.

Our meeting with the social worker was very introductory, as she spent most of the visit gathering background information on the mother, whom we’ll refer to as Estelle.  We learned that she was poverty-stricken and of a slightly low IQ that made her unable to hold a job.  This rendered her completely unable to provide for the six children she has had.  She has never been married, and only one man she has been involved with has ever even claimed one of the children.  And, though Estelle has sisters on the island, no one offers her any help or support.  Her extreme poverty, coupled with her personal inability to care for so many children, had already forced Estelle to place three of her children with various families.  Her only means of livelihood is a very meager sum provided by the government, and consistent supplementation from the one man who has remained in her life.  He is the father of the three-year-old we mentioned previously, whom we’ll call Sadie.  On one occasion, we had the pleasure of meeting him.  It is because of his involvement that Estelle was not looking for a home for little Sadie.  However, this didn’t explain what was going on with the quiet, wide-eyed Miguel.  Estelle was clear that she wanted a new home for Jonathan, and she was clear that she could provide for Sadie—but she never mentioned Miguel.  When asked if Miguel was in need of a home, she quickly said no, but was unable to confirm that she was capable of caring for him, either.  The social worker seemed uninterested, but we weren’t satisfied.  If this adoption process continued, we would have to make sure that Miguel was taken care of.  And, inevitably, we continued wondering if Miguel and Jonathan were the siblings that had been in our hearts for so long.  This, dear friends, begins what we will refer to as “The Saga of Miguel”.  Here he is in his old school uniform.  Isn’t he just adorable? 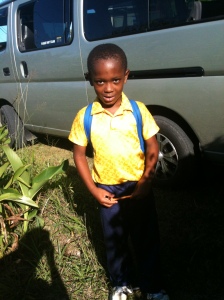 One other interesting point came from this meeting; to our surprise, we were encouraged to spend as much time as possible with Jonathan during the adoption process!  This is more than we had hoped for, and Nic and I were thrilled!  We asked Estelle if we could keep Jonathan on the upcoming weekend, and she enthusiastically agreed.  Now, like I said, from the moment we met Miguel, he truly captured our hearts . . . so it naturally follows that we had to ask if he could also join us for the weekend with Jonathan.  We didn’t know what the future had in store, but we had no doubt that we wanted to be a part of his life in the here and now.  Estelle was more than willing to have us babysit two of her kids for the weekend, so she had no problem with Miguel joining us!

Upon leaving this first meeting, our hearts were so full of possibility and excitement!  At long last we had finally taken the first step in the adoption process!  It was no longer just thinking and hoping–real strides were being made!  Then we began to consider the next step—a weekend with a 6-year-old and 13-month-old!  We were brought back down to earth momentarily as we thought about the upcoming weekend . . . One of us finally asked the pressing question, “Do we have either the knowledge OR necessary supplies to take care of the two of them for even one weekend???”

But, then we realized, the Dynamic Davidson Duo had never felt prepared for any of their big steps–so why start now?!  Stayed tuned to hear about these weekend adventures!

We are The Davidsons. While Jacelyn was attending med school on the Caribbean island of Dominica, we adopted three siblings (2 boys, 1 Girl). We will be living in St. Cloud, MN, for the next three years whilst Jacelyn completes her medical residency! Nic will be writing and doing his best to come speak wherever you are.
View all posts by Nic »
← And the Oscar Goes To…
VI: A Journey of a Thousand Journeys Begins With a Single Journey →