Chapter III: Let’s Get This Show On the Road

Okay, life absolutely got away from us, and the Dynamic Davidson Duo simply couldn’t keep up with the blog, but we’re back with a vengeance!  If any of you remember, we had begun a series to recount the story of our adoption process, and we really want to continue that story (because it’s truly amazing and we want to share the amazing-ness of adoption with you).   Also, your writer has switched:  Nic’s still got too much on his plate, so little old Jacelyn will continue the saga with you!

Chapter III begins the next morning:

In a matter of 3 hours, the 2 mothers that we had met only the evening prior called and confirmed that they would like to move forward with the adoption.  One was the mother of two girls, ages 4 and 6.  The other woman needed us to adopt her 13-month-old little boy, named Jonathan.  Naturally, we were ecstatic!  Finally, after 7 months of searching (not to mention 11 years of waiting for the right time) we had at last found children that were in need of a home.  I had that intense excited feeling in my stomach and it was a little hard to catch my breath.  In all our years of talking about it, we had never come this close to the reality of adoption.  But . . . the very next moment we realized, “Wait a minute, TWO opportunities just opened up simultaneously.  Do we actually have to choose between these children?!”  When this reality hit us, we looked at each other with wide eyes and a look that can really only be described as “I have absolutely no idea what to do”.  It’s something like this.  We received these phone calls on a Friday, and told both mothers that we would contact them on Monday.

All weekend our heads were swimming with both wild excitement and bewildered uncertainty.  As mentioned in Chapter II, we’ve long wanted to adopt older siblings.  The sisters seemed to be the natural choice and our preference definitely leaned in that direction.  Still, we knew that diving into the parenting of 2 older children would be extremely difficult, and we feared we weren’t up to the challenge.  Faced with such an intense decision, we knew it was time to call in the experts.  We needed first-hand advice.  So, we contacted 3 families that have adopted older children.  Naturally, we asked them about their adoption experience, but our main reason for contacting them was to ask the question that laid heavy on our minds:  Were Nic and I, who have never had children, absolutely kidding ourselves?  Could we actually handle it?  Weren’t we ridiculous for wanting our first venture into parenthood to be caring for two, older girls who had suffered neglect and witnessed abuse?  We cringed as we waited for their responses.  We imagined they would tell us to let the girls be adopted by more experienced parents, we shouldn’t dive in so deep, we’d be better off going after an easier case . . .

. . . But would you believe that we were met with the exact opposite?  Each of the families, with their first hand expertise, actually encouraged us!  They said that if we had any desire to adopt older children, we should absolutely move forward.  I was not expecting their words of confidence and hope.  A family that adopted two brothers, ages 2 and 4, told us, “It’s weird, but our transition with them, and becoming first time parents, was actually really easy.  They adjusted to us so well.”  Another mom’s thoughts: “Really, 4 and 6 isn’t that old.  You don’t need to hesitate to say YES to the girls.”  We also received meaningful encouragement from a teenager who was himself adopted at the age of 8.

Now, as a woman who loves adoption, I HAVE to point this out: for any of you who have ever felt the tug to adopt an older child, those words of adoption-encouragement are for YOU too!  The parents we spoke with weren’t simply saying that Nic and I, in particular, could handle the adoption of an older child; they were also giving testimony to the fact that adopting non-infants is a great choice and that it does work out.  There is a pervasive fear, and even negativity, about the adoption of older children.  But, in this moment, I hope you’ll consider the opposite perspective.  Here are three families who have experienced the adoption of an older child, and they absolutely recommend it.  I hope this can simply soften our hearts to the idea and wash away a bit of that fear.  For, you never know; someday you may be needed to encourage a friend who is considering adoption, or perhaps you will ponder the possibility just a bit longer the next time the idea of adoption crosses your mind . . . And, if you’re still not convinced that the adoption of an older child could be a good idea, let Disney convince you.  I recently watched “Meet the Robinsons”, and I’m simply in love with that movie.  It shows so well the beauty of adoption.

Okay, back to our story:  Because we were already leaning toward pursuing the adoption of the sisters, once we received insightful encouragement from adoptive families, we were almost positive that this was the route we should take—almost.  Why weren’t we 100% certain?  Because there was a little boy named Jonathan that we simply couldn’t get out of our heads.  We snapped this picture of him the day we met, and we couldn’t stop looking at it. 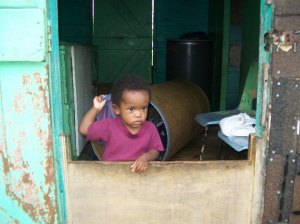 Just when we were certain that we should adopt the sisters, one of us would say, “But what about little Jonathan?”  I, particularly, couldn’t stop thinking about the dear little boy because I had held him in my arms during our brief meeting.  I mean, just think of how hard it is to turn down an adorable puppy once you’ve cuddled with the little ball of fur.  This was obviously a thousand times more powerful.

So, it turns out that we spent the entire weekend with that same “I-have-absolutely-no-idea-what-to-do” look on our faces.  This time it looked a bit more like this.  We simply couldn’t make a decision, and Monday morning was quickly approaching.  Instead, we made two tiny decisions.  First, we scheduled the necessary appointment with the social worker for later in the week, not knowing which mom would be attending that meeting with us.  Second, we decided to call the mother of the sisters first to see if she was willing to attend.  We would see how that first conversation turned out, and then proceed from there.

The time for us to call the two mothers arrived.  With excitement, fear, anticipation, and a bit of panic, Nic called the mother of the two young girls.  A male voice answered the phone . . .

Posted in Uncategorized and tagged Adoption, Dominica. Bookmark the permalink.

We are The Davidsons. While Jacelyn was attending med school on the Caribbean island of Dominica, we adopted three siblings (2 boys, 1 Girl). We will be living in St. Cloud, MN, for the next three years whilst Jacelyn completes her medical residency! Nic will be writing and doing his best to come speak wherever you are.
View all posts by Nic »
← Chapter II: Calls, Kids, and Coconuts
Chapter IV: Receiving Direction →