RSS Feed
← Help Me, Carpenter’s Music
The Sound of One Sim Collapsing →

Here’s to Vice-Presidents and Stylish Burglars

My impatience knows no bounds, apparently.  I was just making a bit of breakfast for myself.  I decided to have eggs and grits.  I was microwaving the eggs (which is healthier and MUCH faster) and Quick Grits, which should’ve been fast enough.  However, not for Mr. Needitnow, no no.  While the microwave was speeding up the cooking process, I inadvertently ate 10 of those vanilla-flavored, styrofoam-textured wafers.  The microwave beeped and I thought, “But I’m not hungry.”  So now, I have to look at this while I’m blogging…. 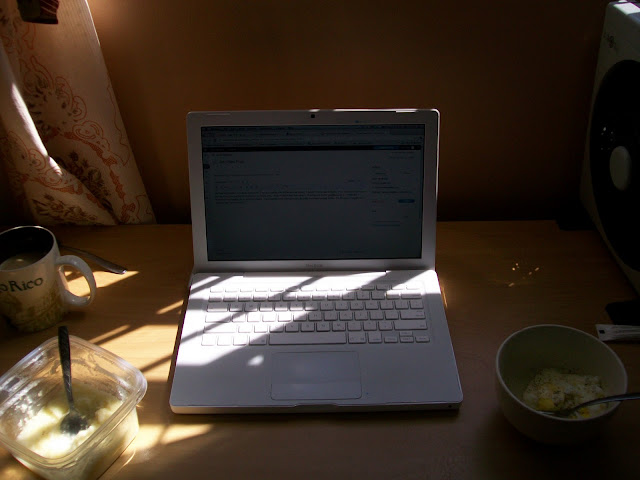 I’m feeling a bit better today, which is nice.  The rain was very refreshing, if you ask me.  I know it was three days straight, but it really brings the temp down (while it’s raining) and it lets me not have to do laundry for three days.  The flip side is that, JUST before it started raining, I hung some clothes out.  And it rained and rained and rained.  Now, three days later, the sun is out and I think they’re going to dry.  If it starts raining again, I’m going to take the clothes off the line and throw them at a passerby.  I know this will accomplish very very little, but I’m going to do it anyway.

So, I mentioned a while back that Dom’s black sand beaches are a result of lava rock being pummeled and eroded over time.  We found out another interesting (and consequently, time consuming) tidbit about that ol’ lava rock:  it’s magnetic.  How do we know this?  Well, my lovely wife has a magnetic anklet that she often wears.  When we came home from the beach recently, she found it to be covered in black sand, which I spent 30 minutes attempting to clean off.  (I had to invent and create a much larger magnet to overcome the magnetic pull of the anklet.)  (That took 29 minutes and 45 seconds.) (Now we need a new toaster AND Jacelyn needs a new anklet.)  Below is a pic of the anklet, almost fully cleaned.  Notice the big blob of black at the magnetic end of the anklet, and the massive, almost bulbous thumb.  (That’s why I usually hire hand models) 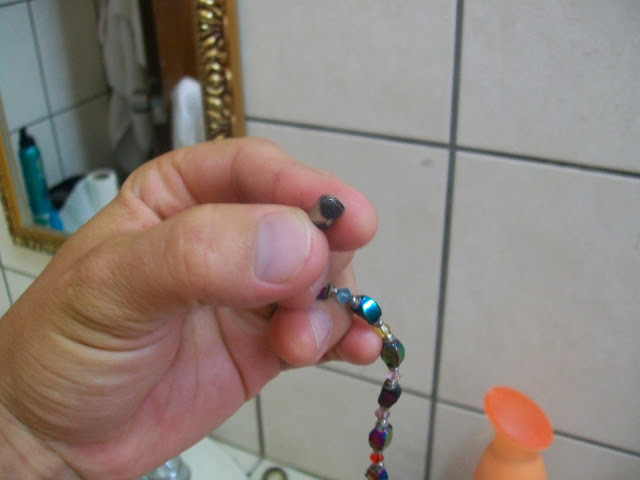 I’m not sure if we ‘ve mentioned it before, but Dominica is home to the last remaining population of native Caribbean dwellers, often referred to as “Caribs”.  On the eastern coast of the island, there is a reservation of sorts for them and, earlier this semester, Jacelyn joined a club on campus called the Salybia Mission Project, which regularly reaches out to the Carib people.  SMP is a student-run group that makes frequent trips to the Carib Territory to staff a medical clinic, which the club has built over the last ten years.  For more info on SMP, click HERE.  Last Saturday, Jacelyn got to go with SMP and spend the day in the clinic!  While there, she was able to help with a patient interview, see a medical procedure done, witness a couple of tests being performed, and visit a paraplegic who is sponsored by the Salybia Mission Project.  She had a wonderful experience.  Due to client confidentiality, Jacelyn was not able to take pictures of the clinic,but she was impressed by the wonderful work that is being done to help the needy.  Oh, and I would be remiss not to mention that, due to the extreme curvey-ness of the road, Jacelyn vomited on the way there.  (not uncommon at all for these roads) Here are a couple of pics she COULD take…. 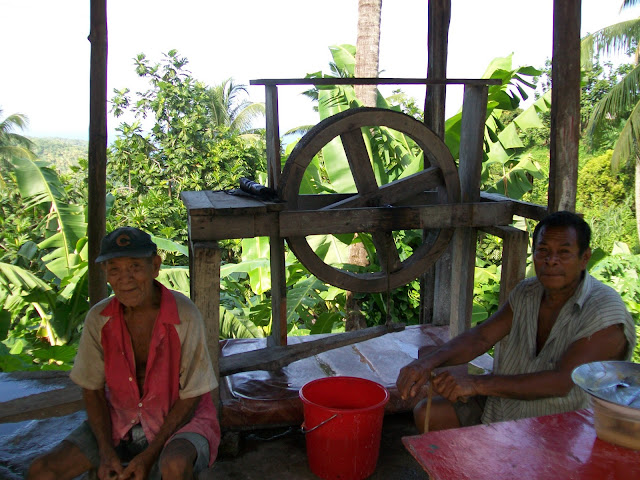 …and a guy making casava bread… 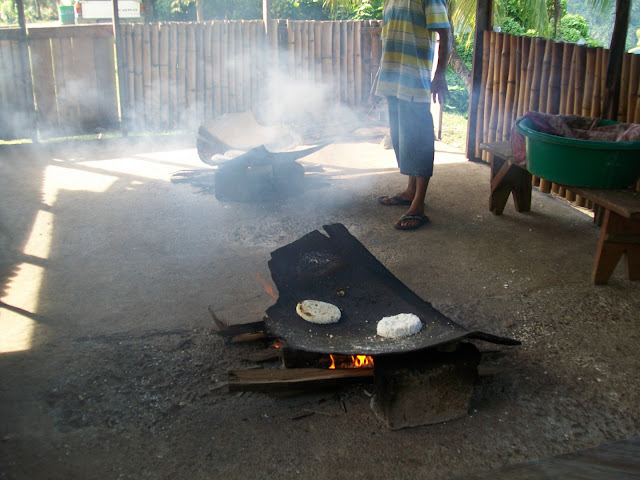 Last Friday, some of the other spouses and I made a trip to the capital city to get some supplies.  While there, we got to ride on the BEST TAXI EVER.  It was called “Nick’s Safari Tours” and we paid him a little extra to drive all the way back to Portsmouth.  If anyone’s interested in looking like you’re having more fun than you’re actually having, call Nick at: 767.449.1599.  He only charges 20 EC per person!  Here’s his transport: 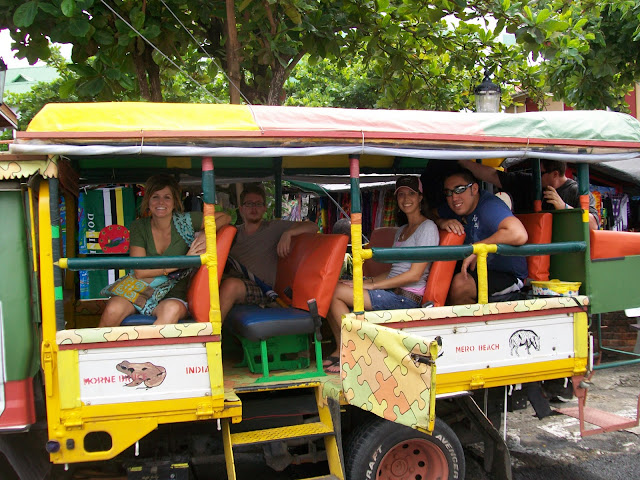 You know how I said that it’s rude to just walk up to someone and take their picture here on Dom?  Yeah, well, that pertains to MOST people.  Some, however, yell at you and say, “HEY! COME HERE.  TAKE MY PICTURE” and then pose like a sassy, darker-tinted John Mccain. 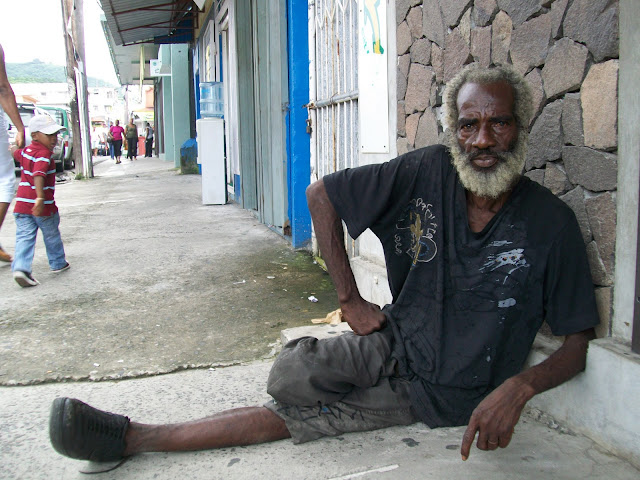 Two tidbits about the picture.  First, I purposefully waited to actually take the pic until Little Nosey Boy in the background looked back.  Second, once I snapped the shot, the man stood up (he has two legs, but was hiding the other one to complete the look), took me aside, and said if I needed a place to live in Roseau, he could get me a place very cheap. (Goal of finding a relatable real estate agent in Rosea: Accomplished)

Two trips ago, I glanced out the window of our transport and saw yet ANOTHER site that, I feel, can only happen on The Mystery Known As Dominica.  I saw two chickens walking down a flight of stairs.  That should be enough.  Now, I KNOW that experiences like that only come along once in a lifetime, so I’m not hoping to get it on camera.  However, we did drive past those legendary stairs and, if you will, I’d like you to picture two chickens walking down these, about mid-way down: 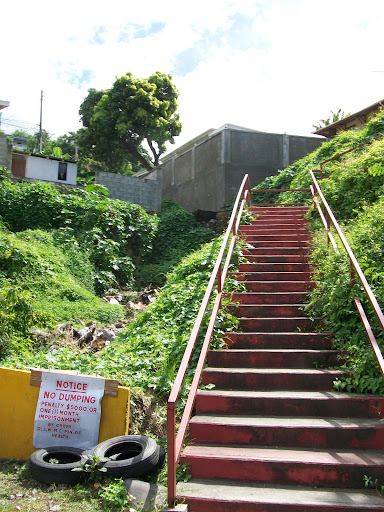 Lastly, people say that you lack certain amenities here that you’re used to back in the States.  I can’t say that I agree.  So far, they’ve had everything I’ve ever needed, no matter how random and odd the need may be.  For instance, when we went to town, I was specifically in need of some traditional Dominican Creole attire AND a crowbar… 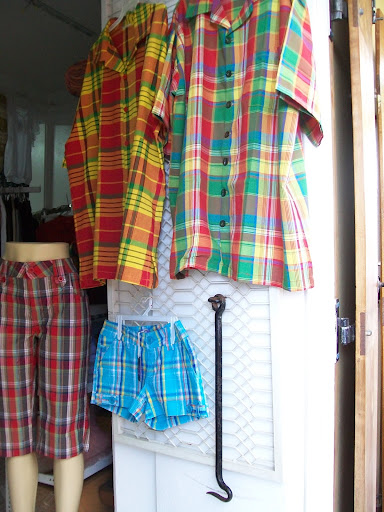 The Lord provides.  I took MANY pictures of the streets and terrain on the way to Roseau, so, feel free to browse our photo album to see more.

We are The Davidsons. While Jacelyn was attending med school on the Caribbean island of Dominica, we adopted three siblings (2 boys, 1 Girl). We will be living in St. Cloud, MN, for the next three years whilst Jacelyn completes her medical residency! Nic will be writing and doing his best to come speak wherever you are.
View all posts by Nic »
← Help Me, Carpenter’s Music
The Sound of One Sim Collapsing →