The Sound of One Sim Collapsing

Jacelyn recently got to go into the Simulator Lab, where they have very expensive dummies that you can practice on.  I know that “dummies” is not a politically correct term, but anyone who signs up to be practiced on by 1st-semester students is dumb.  You aren’t allowed to photograph the “non-smarties”, so I did a quick search to find pics from people who disregarded the photo ban.  Turns out, everyone who’s ever attended Ross University is 100% ethical, which is morally encouraging, but discouraging when you’re looking for a loophole of some kind.  As a result, I have a very nice pic of the outside of the building:

It’s called the St. James Center. I know you’re thinking it should be called The Barn, but there’s already a building called The Barn on campus.  The top floor is a classroom and also where the White Coat Ceremony took place and the lower level is where they keep The Sims. What went on while she was in there?

Well, they got to practice “running a code”.  For those (like me) who’s medical knowledge goes as far as whatever you learned on Sesame Street, “running a code” is when someone has died and you make all the efforts to resuscitate them. She said it was fun because they had to pretend like it was a real event and they had a leader who was shouting orders to everybody; however, because they were all first semester students, none of them knew what to do.  For example, part of the simulation was that the patient’s chart wasn’t in the room.  It was one guy’s job to read the chart.  So, consequently, one guy spent the ENTIRE simulation looking for the chart.  Jacelyn was asked to run a  monitor and she had absolutely no idea how to do that; so, she had to shout above the noise of everybody things like , “Can someone who knows how to run this monitor show me how to work it????”  I picture the scene as being equivalent to when something falls in the way of an ant trail or a playground at the height of recess.

She also got to hit the button that delivered the [simulated] electric shock to the defibrillators. She got to yell, “I’m clear, You’re clear. CLEAR!”.  When it was her turn to do CPR, the instructor just looked at her and said, “What are you doing?”  She is a short girl, so she wasn’t tall enough to do it correctly.  Some of the other students had to grab a stool for her to stand on. (Yes, I, too would sell a family member to the Russians to get a picture of that)

And here’s our latest “Caught On Camera: Goats Edition”. 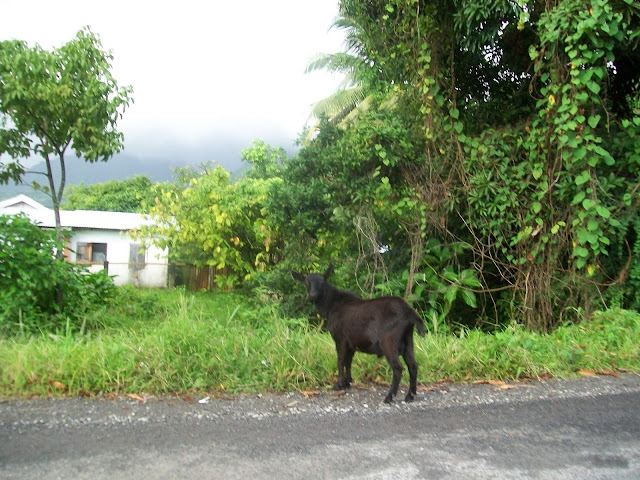 He looks SO guilty.  I invite you to create a caption for this one.  You can leave it in the comments section on the blog or on the actual pic in our photo album HERE.

A couple of things about my trip to the market yesterday morning.  First, I saw Not Beyonce’ again, but took a different approach this time.  I had initially planned to have my friend Brandi stand by her and I’d pretend to be taking a picture of her, but actually take one of Not Beyonce’.  However, the more I thought about it, the more I realized that I didn’t even want to go that far.  Instead, you wanna know what I did?  I just bought my produce and went home.  That course of action was WAY simpler, AND I respected her haughty-yet-not-so-famous wishes.

The second thing about the market is something I’ve wanted to photograph for a while, now.  When the market is in full force, they block the street off so it’s pedestrian only.  In America, the signs would say “Pedestrians Only” or “No Vehicles”.  Boring.  Here, you get this: 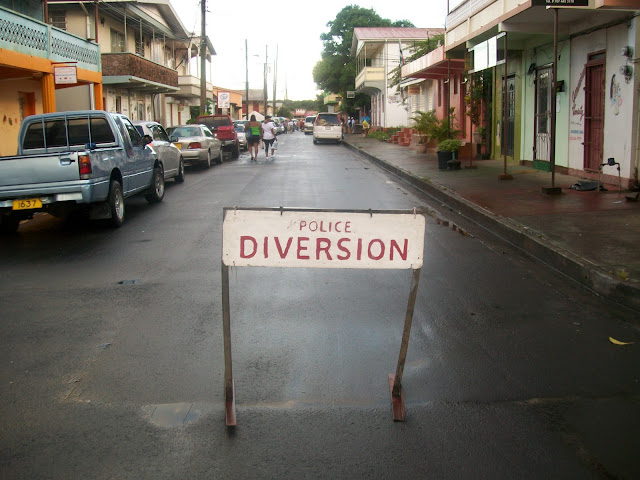 Much, much better, in my humble opinion.  Although, I WILL say that when I think of police diversion, I actually think of this or this.

Jacelyn’s next big test is tomorrow morning, so she’s been prepping for that pretty hard.  On Tuesday, I have a meeting with the Director of Youth Ministry for the island and I’m booked to speak about Theology of the Body at a young adults retreat next weekend!  Well, that’s what’s going on here…. I hope you all have a great day.

We are The Davidsons. While Jacelyn was attending med school on the Caribbean island of Dominica, we adopted three siblings (2 boys, 1 Girl). We will be living in St. Cloud, MN, for the next three years whilst Jacelyn completes her medical residency! Nic will be writing and doing his best to come speak wherever you are.
View all posts by Nic »
← Here’s to Vice-Presidents and Stylish Burglars
Like A Crabsicle on the 3 of November →