Skeletons In Your Belly Button

I came to the realization today that I’ve been a tad false with all of you.  I’d initially said that I would include a blip from my life and a blip from Jacelyn’s each time I blogged, and I’ve noticed that, due to this prevalent selfish, self-centered-ness of mine, I don’t often remember to put stuff about her day in here.  That’s a travesty, especially since she is learning such amazing things every day!

For instance, today in microbiology, Jacelyn learned all about the The Belly Button Biodiversity Project, run by scientists at North Carolina State University.  This is a real study.  They took samples from over 1,400 belly buttons to see what sort of biology was living down there.  Insanely, when all was said and done, the scientists had discovered 662 previously un-named bacteria living in these belly buttons!  Don’t believe me?  Click HERE.  It’s just so crazy all the junk we’ve got going on in our bodies at any given moment. (HERE’S a nice shot of my, bacteria-free belly button)

Which leads me to the next topic: FOOD!!!!!!  I’d like to do another installment “Me Talking About Food Prep On Dom”.  We begin, today with a quick look at how to make Sorrel (so-reel) juice.  For an in-depth study of where it comes from, click HERE.  For our conversation today, we begin by buying a bag of the blossoms from the market.  An entire bag, broken open and artistically strewn on the counter in the sunlight would look like this: 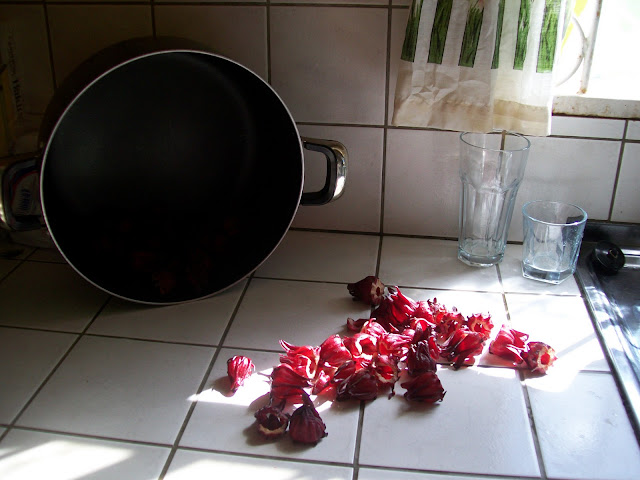 To make sorrel juice, you simply pick up all the pieces you threw on the counter for the picture, toss them into a pot with 6 cups of water, a stick of cinnamon, two pieces of fresh ginger, one chunk of fresh nutmeg.  Boil that junk till the water’s all red.  The juice, when dumped through a strainer, should look like this: 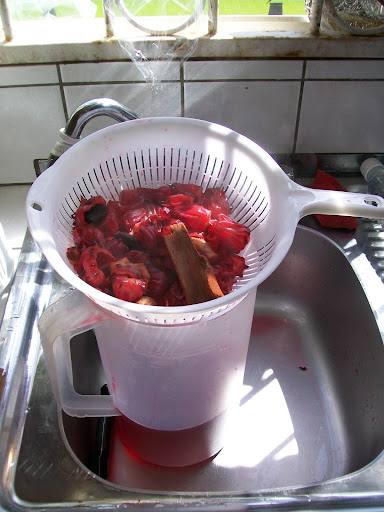 Then, add a bunch of sugar and dilute as desired.  Next thing you know, you’ve got a luscious, homemade drink that no one, including your wife, will drink because, little did you know, it’s supposed to be a Christmastime drink and people don’t do it as much outside of the Season of the Christchild.  If I’d only do my research BEFORE making these concoctions! Blast you, Perfect Vision Looking Backwards.

The second food I’d like you to know about is called Pulao.  There’s nothing all too exciting about it, but it has that hearty, meat-n-potatoes feel to it.  I don’t know what’s all in it, but it’s great and available on Fridays at Sarah’s Snackette.  It looks like this: 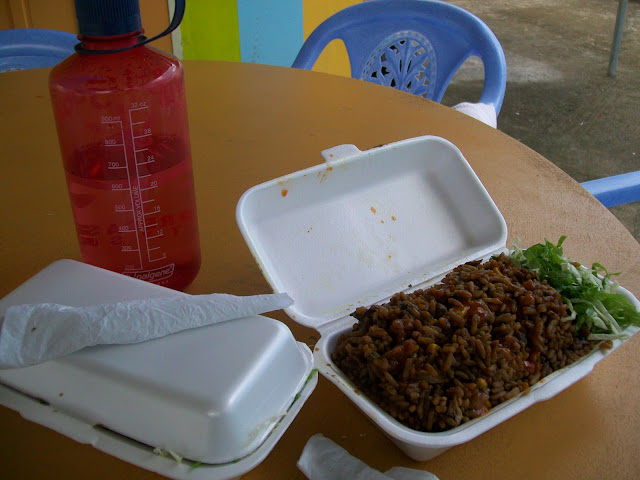 The next menu item of the day is the Passion Fruit.  I’m sure many of you are quite familiar with it, but I’d never really been around passion fruit very much in my life.  I’m not sure if the frigid, barren temperatures of Minnarctica killed all possibility of it, or if the word “passion” was a bit too risque’ for a young’un of my sensitive conscience.  Either way, I was 33 years old when I experience passion of this sort, and I LOVED it!  So, here’s a pic with elements of the whole passion fruite juice making process: 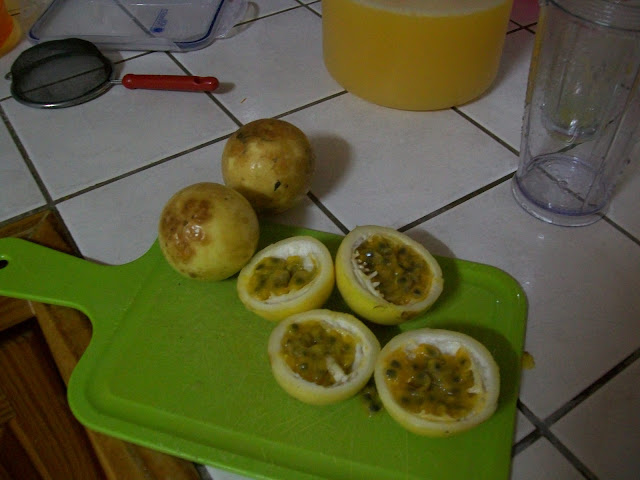 First, you purchase your passion fruit.  If you’re like me, you get it from a guy named “Fingers”, who nabs it out of the woods and openly admits to being in and out of jail often.  Fingers has unusually short fingers, hence the nickname.  Nicknames are an odd thing.  I DO understand why they call him that; I DON’T get why they call me “Smells Like Milk”. (It’s all very subjective)  Anyway, Fingers is VERY nice and I get my passion fruit and star fruit from him.  After getting the fruit home, you slice it open, as you see in the pic.  You gently scoop the seeds and all the “phlegm-ish” stuff into the blender cup, add a bit of water and blend for 1.5 seconds.  Seriously.  Like a second-and-a-half.  Then, pour that mixture through the small strainer you see in the upper left corner.  Add a bunch of sugar and some more water and you’re good to go!  Our friend Zephrina said you can make a gallon of juice from about 5 or 6 passion fruits, which isn’t bad.  Passion can go so far if you let it, amen?  Oh that’ll preach.

The final food is something I like to call “Appetizard”.  I have a “before” shot: 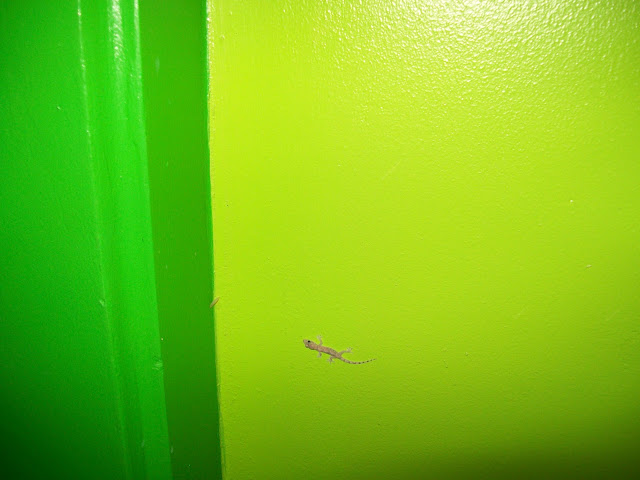 Appetizard is a dish enjoyed by only the very poor and the very rich, but NEVER the middle class, apparently.  These little critters run free everywhere on island, including our bedroom, so they’re relatively inexpensive.  Though fast, they’re not very smart.  There are many local suggestions on how to catch them, from placing a bowl of water soaked in moonlight in the center of the room to placing noodles soaked in spaghetti sauce in the center of the road.  Personally, I opt for the way that capitalizes on their limited intelligence: I’ve taught Burt to do a tap dance routine from Act 2, Scene 4 of Funny Girl, which he uses to distract the lizard while I sneak up behind him and catch him with some chopsticks.  (It’s not as easy as it sounds, because I have to try to hold the chopsticks WHILE playing jazz piano AND making the tapping noise, because, let’s face it, no one makes Chihuahuan Tap Shoes anymore)  Once caught, you merely need to roll them in flour and milk and drop them into boiling oil.  As soon as they float to the top, they’re done and you’re ready to eat fresh, hot Appetizards!  Num, num.

(For the record, the pic is real, but the preceding paragraph is NOT)(I just wanted to end with a bang and didn’t have one today)

We are The Davidsons. While Jacelyn was attending med school on the Caribbean island of Dominica, we adopted three siblings (2 boys, 1 Girl). We will be living in St. Cloud, MN, for the next three years whilst Jacelyn completes her medical residency! Nic will be writing and doing his best to come speak wherever you are.
View all posts by Nic »
← Willy Wonka’s Caribbean Time-share
Help Me, Carpenter’s Music →