RSS Feed
← A Dominican Minute
Skeletons In Your Belly Button →

Gentle reminder: this and all our blog’s are best experienced by only scrolling down far enough to read the current sentence.  There are always going to be pics that act as a punchline and, if you see it ahead of time, it ruins it for all of us, yes?  Moving on.

The weather’s been great, lately.  It rains for a little bit every single day, which is turning the usually boring act of hanging out wet laundry into a weird mix of Farmer’s Almanac, Weather Psychic, and “Don’t Swear At The Clouds Because It’s Not Remotely Their Fault” (a game I recently invented)(In case you haven’t noticed, I invent a lot of games here.)  I can’t tell you how many times I’ve done laundry specifically because it’s SO sunny and windy out, only to hear rain pouring down five minutes after I’ve hung it out to dry.  It makes me think that if we just put our heads together, we’ve GOT to be able to invent a machine that you could put your wet laundry into, push a button, and it will keep it safe until the rain stops and you can put it out on the line.

A couple of interesting things happened at the market last Saturday morning.  First, I saw this rainbow: 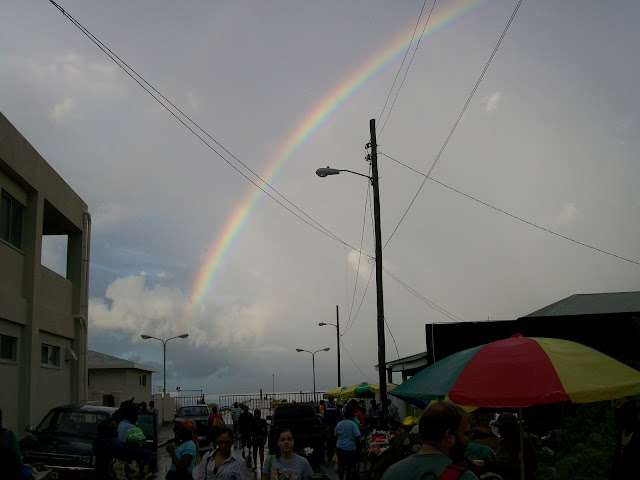 Cool, yes?  Interesting aspect of living in the Caribbean, I found the end of that particular rainbow, and it contained a pot of tuna.  Honestly, though I didn’t expect gold, I NEVER expected tuna.  Interestingly enough, I’ve heard that in Jamaica, the end of the rainbow just contains pot. (I have no way of substantiating this claim, however)

The next interesting thing that happened at the market was that I had an encounter with a celebrity look-alike.  Let me set the scene first.  I have never (ever) watched professional wrestling, like WWE.  However, since entering the Caribbean, starting with Puerto Rico, I repeatedly get asked if I am a famous wrestler known as The Miz.  I see the resemblance, I guess, just not in the face area; but, okay.  It is literally at least once a week that someone comes up to me and asks me if I’m him. No lie.  In church one day, a little kid had been staring at me forever and, halfway through service, he leaned over two of his friends and whispered, “Are you a wrestler?”  I smiled and told him no.  He nodded and went back to looking forward.  Five minutes later, he leaned back over and whispered, “Do you have a brother?”  So fun.  The resemblance is so strong for the people here that, while eating dinner at a restaurant in Puerto Rico, the owner came out, took a picture with me, and said he was going to put it up in his shop, knowing full-well I am not The Miz.  Anywhooooo, back to the market.  I was shopping and saw a girl who looked VERY much like Beyonce’.  You could tell this girl was, in one sense, trying to look like her: same hairdo, a bit of makeup, etc.  So, li’l Nic thinks it’d be great to have a photo of “NOT The Miz and Beyonce’ at the Market” for you, my precious readers.  After getting my veggies, I walked up to her and said, “Hi!  I know you’re NOT Beyonce’, but I was wondering if I could get a picture with you…”  She smiled, laughed, and said no.  I said, “Really?”  She smiled, laughed, and said yes.  Then she asked me if I was a first semester student.  I told her my wife was.  She smiled, laughed, and said, “Well, I’ll tell you what.  If I see you again someday, we can do a pic then.  Hang in there!” Then she walked away.  Now, I like people, I do, but REALLY?  I can see the REAL Beyonce’ saying all of that; but NOT Beyonce’.  Come on!  Pose for the pic!  Anyway, I never even got the chance to explain why I wanted the pic!  So, I did the next best thing.  I took a picture of “NOT The Miz and NOT NOT Beyonce'”.  Check it out. 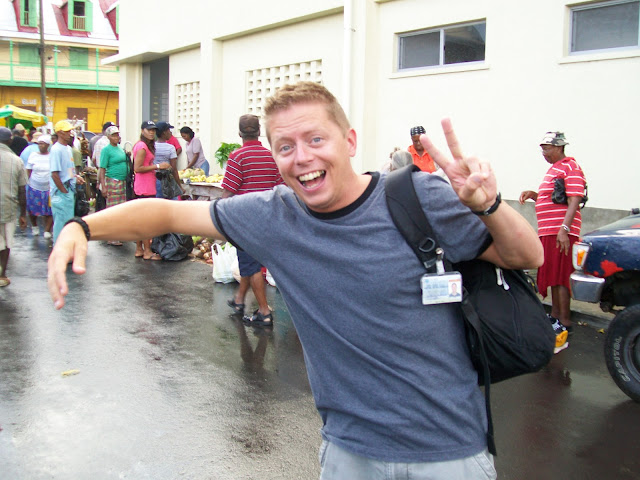 Lastly, I have finally pieced together a few oddities that I’ve noticed since arriving on Dom.  First, I know that the Caribbean is a wonderful escape for even the most eccentric of travelers.(There IS a Michael Douglas Blvd)  I also know that Dominica, being the Island of Nature, is unique in the Caribbean, due to it’s relative lack of tourist catering.  I am further aware of a definite ‘mystique” to the island, what with the constant foggy-topped mountains, rain in the blinding hot sun, the utterly complete knowledge of Bob Marley songs, and Ninja Gardeners.  Add to that the fact that I have seen very small people around town, buying, selling, and disappearing in a poof of orange and green.  These details had been running through my mind like a CNN ticker, always scrolling, never finding an answer or an explanation.  Until Saturday.  On the way out of the “downtown” area, all the swirling questions and mysteries united and became clear.  THE  one and only Mr. William Wonka has a home here. 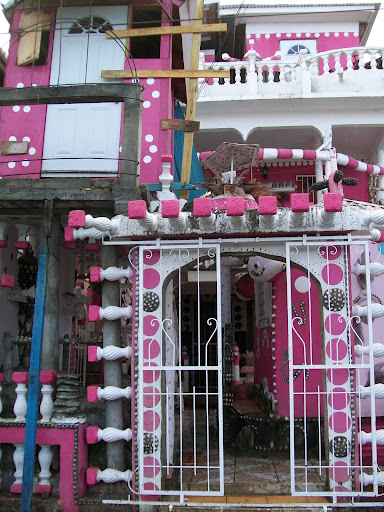 He apparently co-designed and timeshares it with the inventor of Pepto Bismol and M.C. Escher’s descendants.

We are The Davidsons. While Jacelyn was attending med school on the Caribbean island of Dominica, we adopted three siblings (2 boys, 1 Girl). We will be living in St. Cloud, MN, for the next three years whilst Jacelyn completes her medical residency! Nic will be writing and doing his best to come speak wherever you are.
View all posts by Nic »
← A Dominican Minute
Skeletons In Your Belly Button →