RSS Feed
← Dominicafe’
A Plague On Both Your Goats →

(That’ll be the last coffee reference I’ll do.  I’ll branch out in my brilliance.) (you have to pronounce it Carib-BEENS, to make it not gruesome)

Hey, all!  Sorry it’s been a few.  I am currently looking into all the details for shipping the ol’ lappytoppy to me ASAP.  We have our best technicians working on the problem.  Let’s see…what’s been up this week….

Found the Waldorf, but didn’t have a camera, so I took a picture of the land that the goats have been clearing, instead.  They literally eat 24 hours a day.  I have walked by at 11pm and shined a flashlight and seen them just chomping away.  So, here’ what Phil and Sandra (their names) have been up to. 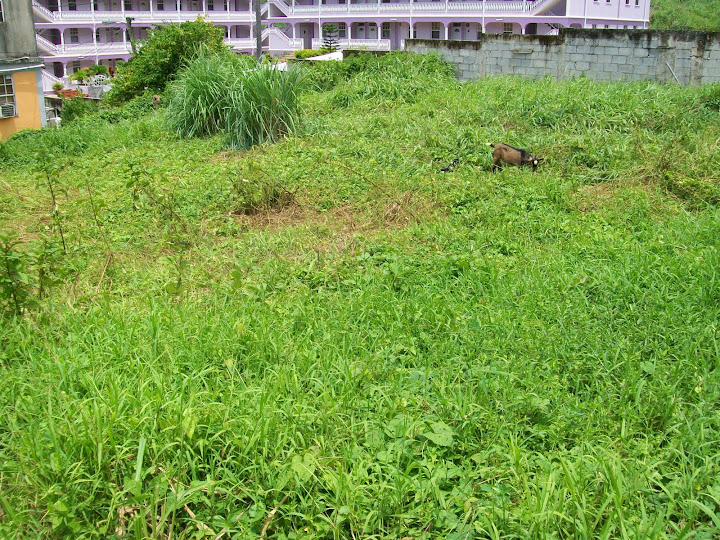 Secondly, we experienced the loudest thunder we’d ever heard in our lives last night.  It’s so funny because, although you KNOW the lightning is the dangerous part, it’s the thunder that ends up shaking the house and making you laugh out loud  in an attempt to avoid running through the streets like a madman. (which only serves to frighten Phil and Sandra)

I grabbed a lobster with my bare hands, yesterday, because my snorkeling buddy (from Wilmar, MN, by the way) did it.  Difference is, he’s a mountain man with a bushy beard and he kept hold of his lobster and I (with no beard) got startled by the spikey nature of the tentacles and let go.  They were only small lobster, like this, but I still wish I was more manly that I turned out to be…

The BIGGEST news of the week was…well….let’s let Jacelyn tell you in her own, sweet, brilliant way, shall we:

Hello readers out there!  This is Jacelyn—I just wanted to send out a quick note.  And, I must start with a disclaimer; when I do have a chance to write something on here personally, I won’t try to make it funny like Nic does—I’m just gonna plain, old write.

So, I’ve officially made it through my first week of med school!  And I WILL be excited about that, because we’ve got to be proud of our baby steps in life!  I’m also excited about it because this afternoon we had our White Coat Ceremony.  We got to hear really encouraging words from several different doctors; they insisted that we ARE capable of making it through med school, it will definitely be worth it in the end, and we are entering an incredible profession.  It was like an amazing pep talk before a scary and overwhelming event.  I’m really thankful they held it!  They passed out a really great “physician’s morning prayer” that was written by a doctor in the 1200’s, which I’ll definitely be hanging on to!  And, it was fun to take a bunch of pictures with my new med school friends.  You can take a look at them in our on-going photo album!

Thanks, Jacelyn!  Great to have you on the show.  You were amazing.  I mean it.  Simply wonderful.  Please don’t go.

Below are a couple of the highlight pics from the ceremony…. 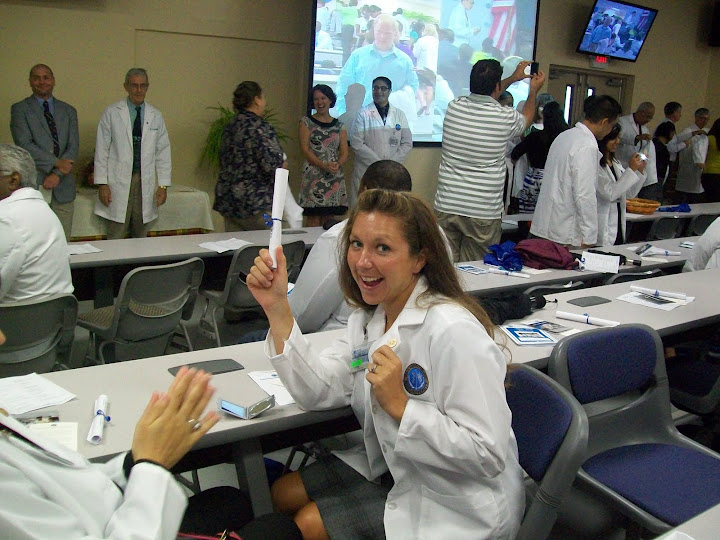 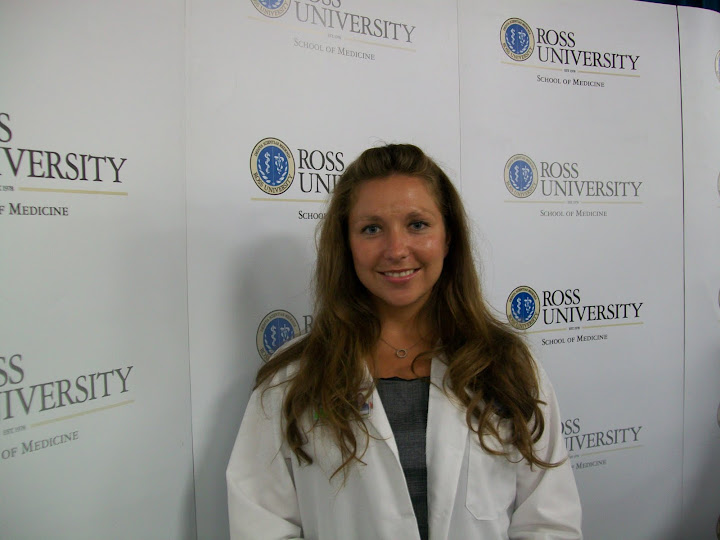 The president of the Commonwealth of Dominica, President Nicholas Liverpool, also attended the event, which was awesome!

I went to the market again, yesterday, and branched out in the seafood category.  I not only got a pound of Yellowfin Tuna, but I also tried a bit of Parrot Fish, pictured below. 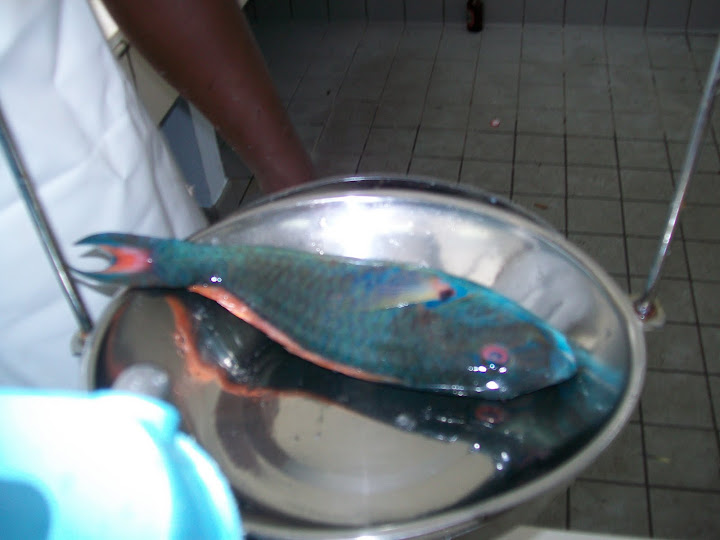 You can choose which one I bought.  Let’s just say it was an amazing experience, because they’re so rare.  I also saw the following scene, yesterday: 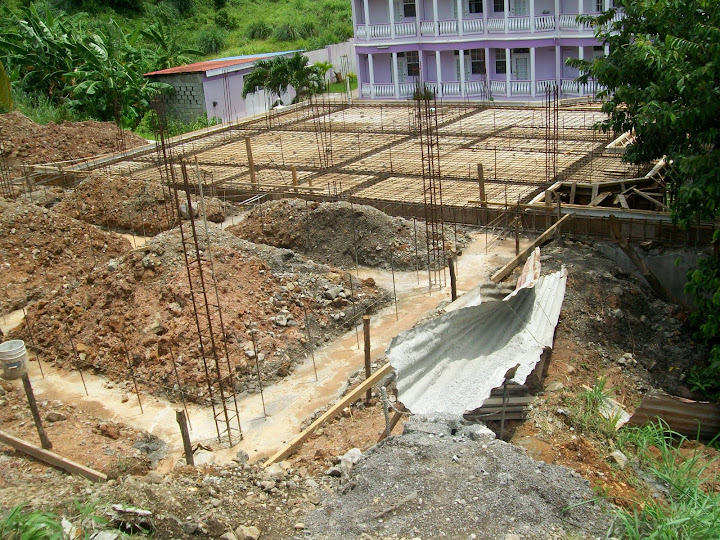 On the walk to and from school, they are building a new structure of some kind.  They’re currently working on the foundation.  I want to draw your attention to the half-folded sheet of corrugated metal to the right.  It’s held in that shape by some wire.  Anyone want to take a guess as to what it is?  That’s right, it’s the “tube” they use to pour the concrete into place with.  I saw them using it the other day on another part of the foundation.  I always love it when you can see people working with what they have.

Well, I guess that’s enough for today, I guess.  As a teaser, I leave you with this pic, which I’ll write about later and which I’ve entitled “The Suitcase of Broken Dreams”: 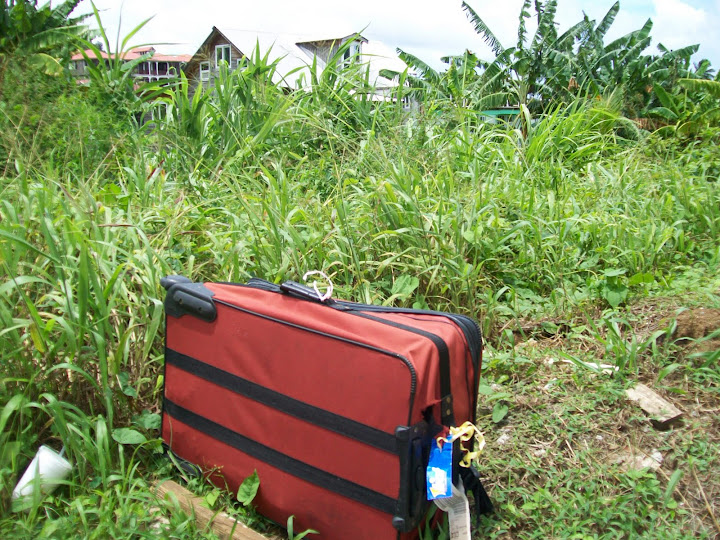 We are The Davidsons. While Jacelyn was attending med school on the Caribbean island of Dominica, we adopted three siblings (2 boys, 1 Girl). We will be living in St. Cloud, MN, for the next three years whilst Jacelyn completes her medical residency! Nic will be writing and doing his best to come speak wherever you are.
View all posts by Nic »
← Dominicafe’
A Plague On Both Your Goats →