As for the last couple of days, there’s not been too much to report.  Still trying to work out the ol’ computer problem.  I cooked our first homemade meal, tonight!  I forgot to take a picture of it, but it consisted of: chicken breasts marinated in mango puree and lime zest, oven-roasted potatoes, sub-par corn on the cob, and fried plantains.  All in all, it came out well.  I think the biggest letdown was the quality of the corn.  Just not as good as back in Minnesota.  (Of course, it could be because I paid 2 EC too much for it, according to Tiney, who runs the bread stand on the corner)

I have been slowly making “friends” with the local food peeps, which is one of my favorite things.  (along with, you guessed it, raindrops on roses)  Tiney, is one of them.  She’s VERY friendly and just today remembered my name.  She sees so many new students every semester that it’s way more difficult for her than for me.  I only know one person on earth named Tiny, and there are like 193 guys named Nic Davidson here.  I hope to put up pics of the locals in their respective shops, but I have to go slowly, because it is slightly offensive here if you just start walking up and snapping photos.  That said, I have a story and a photo to share….

Jacelyn’s grandparents live in Columbus, GA.  Her granddad always hangs out at a locally-owned, one-location donut shop called Golden Donut.  There is only ONE Golden Donut in the world, and it is on Manchester Parkway.  The other day, we were walking through the newly-opened IGA grocery store and Jacelyn saw this: 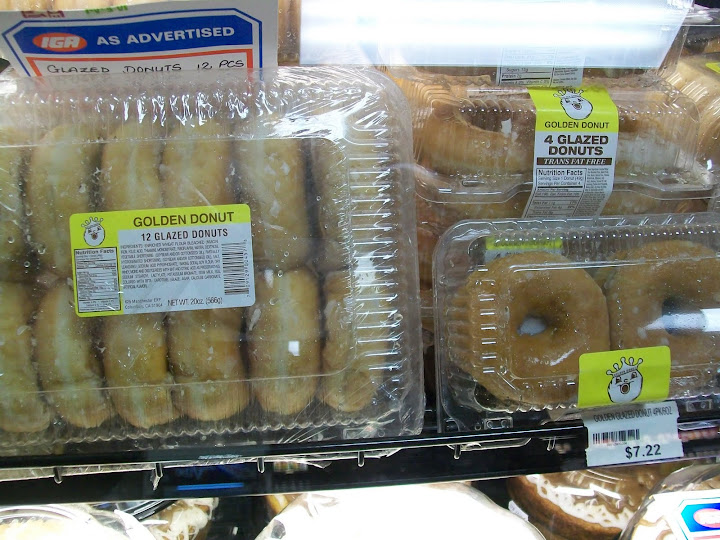 We don’t know the whole story, yet, but I think that picture speaks for itself.  It turns out that Mr. Walter Disney was not blowing smoke when he wrote that repetitive and mind-numbing jingle. (oh, and in case you haven’t learned, yet, when the words are in a different color, you can click on them and they magically transport you to another place in time and space)

Jacelyn has a couple of tidbits for you, channeled through me, of course, because she’s studying behind me repeating “Superficial branch of the transverse cervical artery” over and over and over like a theme park jingle for med students.

First, if a package is labeled “No Trans Fat”, it contains absolutely no trans fat; if it is labeled “zero trans fat”, it is allowed to have up to half of a gram per serving.  Feel like you’ve been duped?  Well, join the club.  I was just eating a bag of White Castle Homestyle Onion Rings.

Second, she was so excited when 5pm came around, today, because that meant she had sat in lectures for 8 hours!!!  THAT is why she’s the med student and I’m the one who is meeting Tiny and playing the new game I invented called “Find the Cow”.  You can always hear one around, so I’ve started to keep one eye out for it.  Today, I found it.  Can you “Find the Cow”? 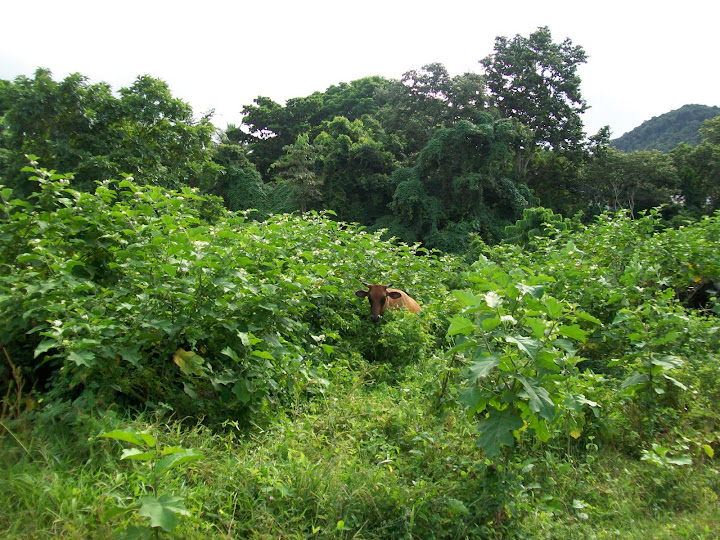 I named this one Waldorf, so that the game could also be called “Where’s Waldorf”, after the well-known hotel in New York City.

Well, I guess that’s all for now.  The meeting with the youth leaders here in Portsmouth got moved to next Thursday, so, I guess I’ll finish scrubbing the apartment down and work on the lessons for the youth group up there in Duluth.  As always:

We are The Davidsons. While Jacelyn was attending med school on the Caribbean island of Dominica, we adopted three siblings (2 boys, 1 Girl). We will be living in St. Cloud, MN, for the next three years whilst Jacelyn completes her medical residency! Nic will be writing and doing his best to come speak wherever you are.
View all posts by Nic »
← Latte’ Day Saints
Roasted Carib-beans →