RSS Feed
← A Mini and a Tiney
Ninja-endorsed Lawn Care →

Hello, all!  I am very sorry that it’s been so long since I’ve been able to update the ol’ blog for you.  I noticed it has been 11 days since I was last on here.  The real difficulty has been, of course, the lack of a computer.  When Jacelyn was studying for her first mini, there were very few moments when she was was away from this little screen.  It was like that scene in that poorly-written, badly-filmed, and wretchedly-acted movie about teenage vampire love where the girl sat in a chair for like 29 months.  If I’d taken some time lapse photography of Jacelyn it would’ve been of her, stationed in front of the computer, and the only thing that would change was the type and level of the liquid in the glass next to her.  She passed though, and that’s what really counts.

She was also able to take part in a clinic where you learned how to take blood, which I pictured to be like THIS, but later found out it was like THIS, from a fake arm, which I found to be even more creepy than what I’d imagined.  FROM JACELYN: “I hit the vein both times on my first try!”

Jacelyn has had one more big revelation since that first mini, oh so long ago:  “I’ve now come to realize that not only do I have to study more than I ever did before, but I have to study more constantly.  There’s never more than one evening of rest that you can take after a test.  The next day, you have to start studying for the next one.”  I can attest to this.  You know that last few days before a really big exam, when you’re cramming and rallying and crying and in the “bargaining stage” (where you’d sell an organ to get an A)?  Well, as far as I can tell, med school is that, only daily, more expensive, and I get a tan.

I have been finding Waldorg & Co. everywhere, lately!  The latest development has been nighttime sightings.  Obviously, the game is much harder at night; you can hear the mooing, but the odds of finding the source of the moo are small.  For a successful night-finding, the animal basically has to place his/her self directly in your line of sight. 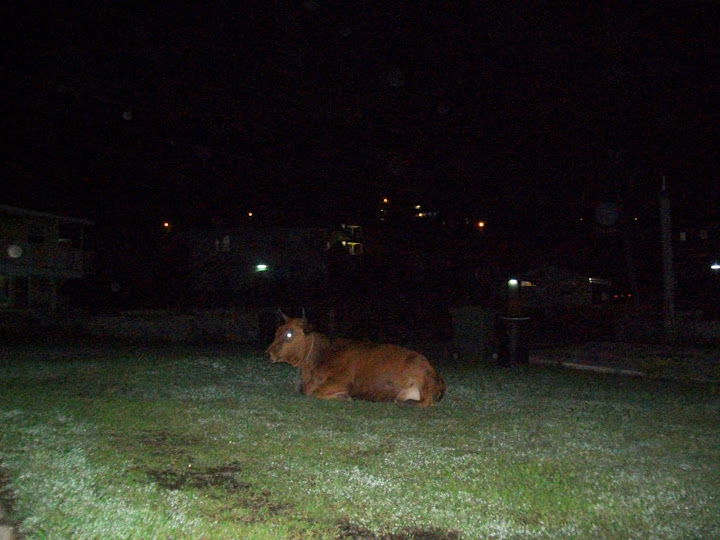 Or…line of smell.  My mother-in-law and I were walking home one night and I said, “Well, I can SMELL Waldorf.  Wonder where he is?”  Almost in the same breath, I glanced to the right.  Not 10 feet away, in a pile of dirt, was Waldorf & Co. 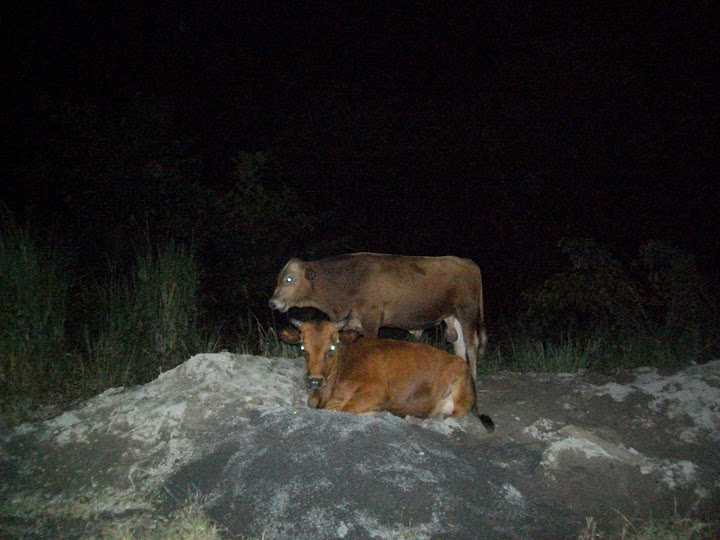 Now, some of you out there, especially the more PETA-ish types, might be thinking, “Nic, you say you’re a loving person, but you keep interfering in bovine life.  You’re bothering them and you have NO RIGHT!!!”  Well, first of all, there’s no need to yell at me.  Second, I’d like to point out that I’ve never said I was a loving person.  I might have said I love BEING a person and you just misheard me.(so, it’s your fault)  Third, if there was EVER any doubt as to whether or not Waldorf and his bovinions (bovine minions) enjoyed my photographic company, I think the nearly ear-to-ear smile on his face says it all. 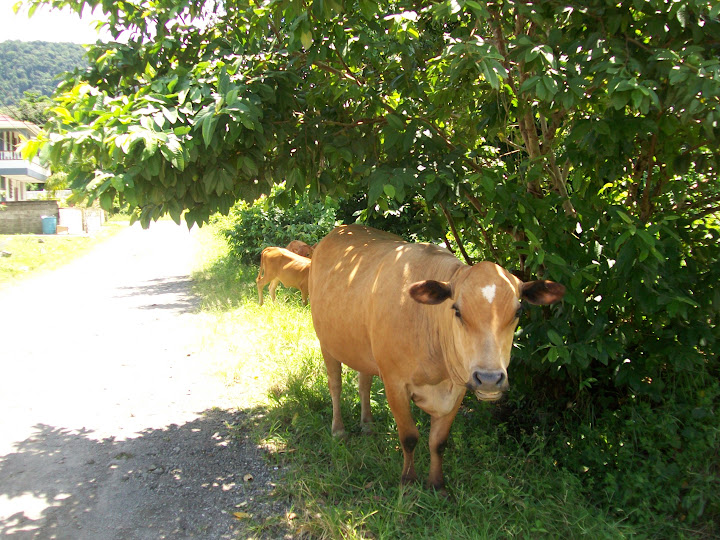 Yes, my friends, Waldorf has come out and officially endorsed my official endorsement of Waldorf and Co. by posing for this photo session.  So all you animal lovers out there, if you’re looking for a candidate to support in the upcoming election of any kind, Waldorf is the perfect fit.  Not only can he be smiley, he also has a tough-guy pouty look: 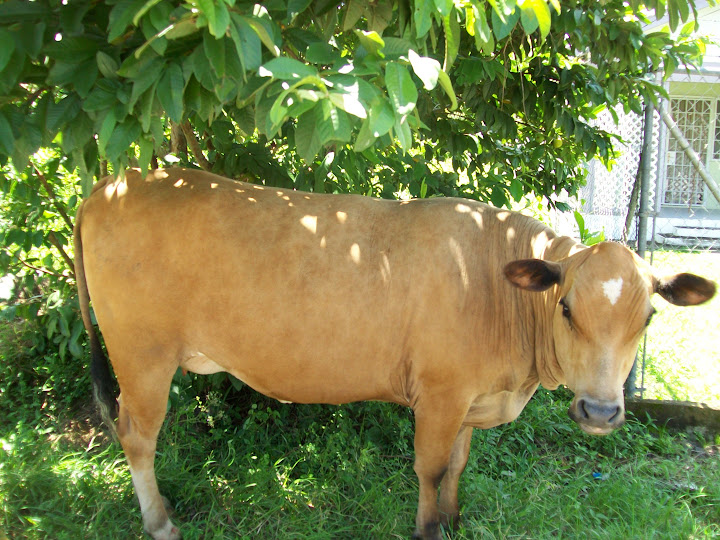 Notice the furrowed brow and that bottom lip jutting out?  That’s the Tough Guy Pout, also known as Blue Steel in the human modeling world.  Lastly, just to be fair in the allotment of screen time, here is a shot of some of Waldorf’s “cowstituents”: 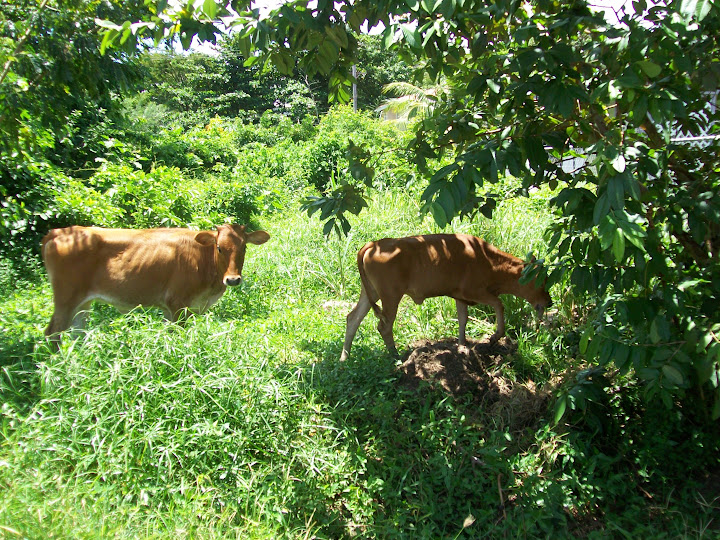 The glaring one on the left is Charleston and the illusive one on the right has never given a name, so I call it Nobody.  Rude, maybe, but if he won’t divulge a name, he’s Nobody to me.

You may have noticed the mention of my mother-in-law.  She came for a whirlwind trip from Friday night to Monday morning!  One of the coolest parts was when we went on the trip up the Indian River.  You may remember that Jacelyn and I were able to go on the same trip when we first got here.  There was a noticeable difference between the two trips.  Whereas our first trip involved cramming 14 of us into a little rowboat, this trip was just Marmee and me (which sounds like a third book in a Louisa May Alcott trilogy).  Also, our captain on the most recent trip took us on the stream less rowed and we got to see the exact spot where they built Calypso’s house in the swamp scene in Pirates of the Caribbean II.  The following pic is exactly where they built the shack.  Our guide, Gregory, said that the entire crew was very friendly and careful when they were filming.  They even built the house around the trees, instead of cutting any down.  Just to the left of the leaves in the center is where they built the house. 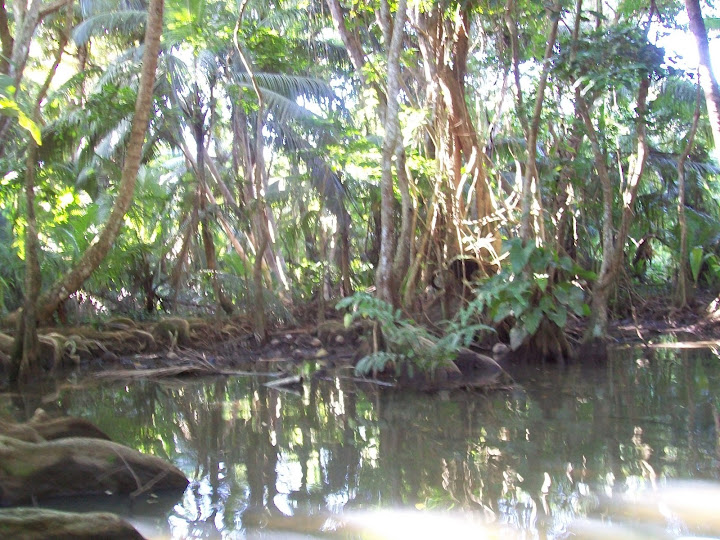 We crammed a lot of fun into that basically two-day period and, best of all, our dog is here now!!!!!  We were initially planning on taking him with us when we first came, but his paperwork didn’t come through in time.  So, Marmee (as I call my mother-in-law) was kind enough to make the trip with him. I think the heat is a bit of a shock to him, but he’ll adjust.  I was able to get him a job pulling a plow HERE and, because of the patient and understanding nature of the people of Dominica, his boss has agreed to let him get acclimated before they hitch him up!  God always works stuff out, yeah?

I’m still waiting to hear about the computer that was being brought to me from the states.  It arrived last night, I think, so I am just eagerly waiting.  I also want to assure you that I’m doing much more than spying on cows and scouting Johnny Depp photo spots.  This is just the sensational stuff that keeps me on the front page of Blogger’s Life Magazine.

We miss you all and, as always:

We are The Davidsons. While Jacelyn was attending med school on the Caribbean island of Dominica, we adopted three siblings (2 boys, 1 Girl). We will be living in St. Cloud, MN, for the next three years whilst Jacelyn completes her medical residency! Nic will be writing and doing his best to come speak wherever you are.
View all posts by Nic »
← A Mini and a Tiney
Ninja-endorsed Lawn Care →