RSS Feed
← Pineapples and Tony Danza
I Got A Fever! →

Beaches, Barrels, and Factor B

Hey, there, Strangers!  I know it’s been a while, but believe me, there’s been good cause, and I’m about to give you every detail from the last 4 weeks.  I’ll start with every single toilet experience.  Well, maybe I’ll “hold off” on those stories until you’ve heard the less interesting anecdotes.  You gotta “let it build”, ya know. (wink)

To start with, we moved to a new location!  We loved our old apartment and our location, but, for various reasons, we decided to relocate.  A wonderful lady in our church, Fredricka, just happened to have an opening in the house above her, so we jumped at the chance.  Not only did we gain a bath tub, but also a separate work space.  In our first apartment, we’d kind of converted the back room into the bathroom/office/dining room/sleeping quarters/recording studio.  Here at Pineapple Manor (our title, not the locals’), each of those categories has its own space. (Except the studio, of course)(Where do you think we live–Jamaica?)  We’ve given our residence that name because of the small, picturesque pineapple that is growing just outside of the frame in this picture of our front door: 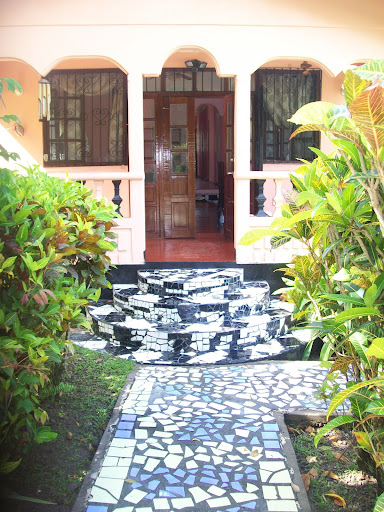 And remember this?  Well, now we have this: 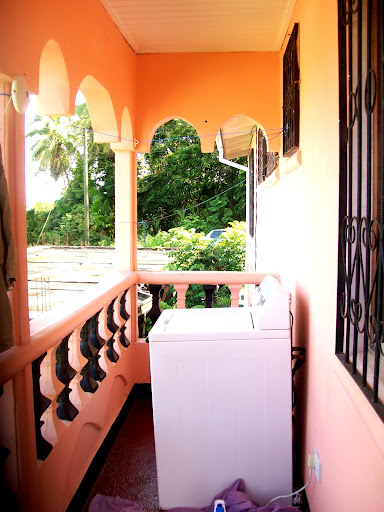 That’s right, we have a peach patio!!!  So, I can grab my Wonder Wash, head out the patio, and allow the peach to distract me from my work as I place the washer upon the…………OMGoodness!…………….we have a WASHING MACHINE!!!!!!!!!!!!!!!!!!!!!!  Why did I not notice that until right this moment?  I feel so silly about having been excited about the peach walls.

In one of our first posts, we mentioned that we shipped all of our belongings to Dom in 55-gallon barrels.  While moving to this new place, we found that you can get a lot more into barrels when you are specifically packing to move to a different nation than when you are hurriedly throwing everything into them to re-locate to 5 minutes away.  We ended up making two trips with Kenny’s van crammed to the ceiling and one barrel filled, emptied, then refilled on the second trip.  As you probably know, when moving, you can misplace things if you’re not careful.  Imagine our surprise when we got to the bottom of one of the barrels and found: 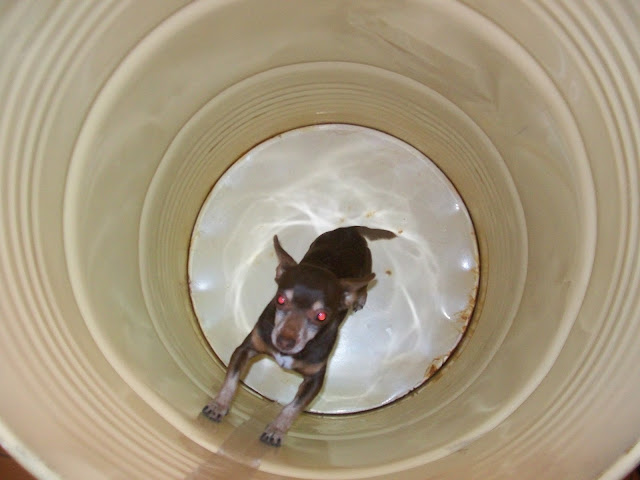 (You can see that he also found the red contacts we’d gotten him for Halloween when he went trick-or-treating as Edward Cullen.)

AND NOW A WORD FROM OUR RESIDENT DOCTOR:

The people who discovered, and then got to name, the various components of the immune system decided it would be “easier” to just label everything with letters and numbers rather than actual names.  So, for the lucky ones of us who get to learn about the immune system, here’s a sample of the kind of things we get to learn.  It sounds so ridiculous when you start saying all these things in repetition!  Our teacher even noted that this following discussion was his favorite part of the lecture.  Even though it won’t make such sense, just read through it to catch the absurdity!

When a substance called C3 comes in contact with a bug in your body that shouldn’t be there, the surface of that bug splits C3 into C3a and C3b.  C3b remains attached to the surface.  Factor B comes along and splits C3b into C3bA and C3bB.  C3bB again stays attached to the bug surface.  Then Factor D enters the picture; this substance splits C3bB into C3bBa and C3bBb.  Oh yes–and it gets a little better.  C3bBb is a C3 convertase, meaning it can also split C3 into C3a and C3b.  C3b joins C3bBb to make none other than C3bBbC3b!  Fortunately that particular compound doesn’t continue to get bigger!

Jacelyn is beginning her second week of her THIRD SEMESTER of med school and we’re finding that each consecutive semester gives her new ways to sound brilliant.  Yes, indeed, she made it to what is considered her second year of med school!  During the break between semesters, we were amazed to find $40 tickets to Barbados, so we hopped over, skipped to our cheapo hotel (with kitchen to keep food costs down), and jumped into the ocean.  We literally did nothing.  We read about 5 books each and we watched old black-n-white movies on the computer at night.  I think it was the first time I’d ever seen Jacelyn be so tired that she was capable of just sitting for days on end.  We took very few pictures while we were there, mainly because that would require effort, but also because there wasn’t much besides the gorgeous ocean/beach.  I have this pic… 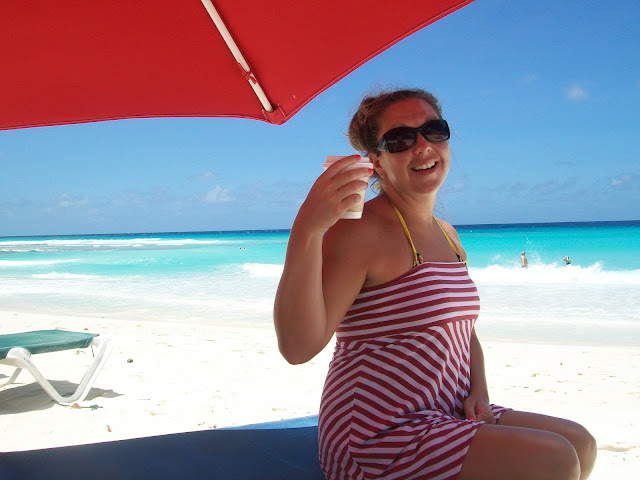 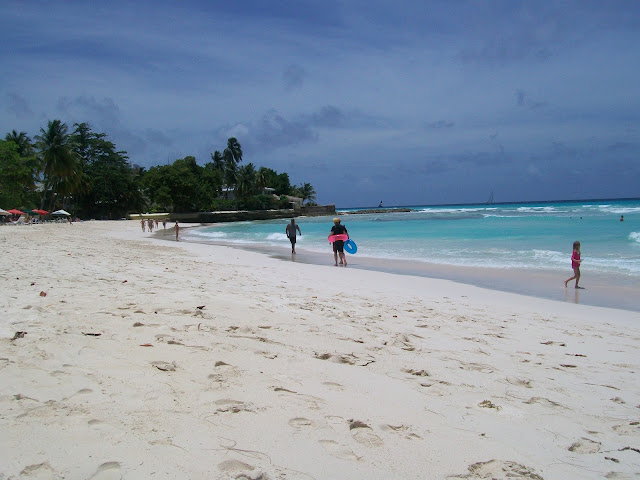 I took the first pic, because, yes, both her and the water ARE that beautiful; I took the second pic because I’d never seen two grown men walking down the beach with tube floaters, one of which was pink and around the man’s waist.  We wanted to get some pics of the amazing Green Monkeys of Barbados, but we only saw them once and we didn’t have any sort of camera with us.  Every time we made the journey over to where we’d seen them, you’d swear it was an abandoned lot.  They must’ve been at the beach.

Anyway, after many days of “chillin’ out, maxin, relaxin all cool”, Jacelyn thought she’d like to spend her last hours of freedom with sore muscles from the longest, most-difficult hike on the island: The Boiling Lake Hike.  It’s an 8-mile walk, the initial hour of which Virtual Dominica describes as climbing “steeply uphill to about 2,500ft, then a steady SE climb along the ridge to the top (3,168ft) where’s there’s a clearing and a good point to stop and rest. It can provide spectacular 360° views… or it can be cold, misty and miserable.”  On our hike, we got both!  On the way there we were able to take this video (which, by the way, represents the first time I’ve posted video on our blog!):

….and on the way home, the same peak looked like this:

Between shooting those two videos, we hiked through one of the coolest terrains we’ve ever seen.  Because Dom is essentially still actively volcanic, there are hot springs everywhere and, if you’re out in the ocean, the air bubbles that come up are called champagne.  Well, when those vents are big enough, and happen to occur where water pools up, you get hot springs; and when the pool and the vents are even bigger, you get the second largest boiling lake in the world.  It is right around 200 ft across, over 200 ft. deep, and boils at a temp of right around 200 F.  Virtual Dominica says, “It is believed that the Lake is actually a flooded fumarole, a crack through which gases escape from the molten lava below, rather than a volcanic crater. The natural basin of the Boiling Lake collects the rainfall from the surrounding hills and from two small streams which empty into the lake. The water seeps through the porous bottom to the hot lava below where it is trapped and heated to boiling point. “

To get to Boiling Lake, you must first pass through The Valley of Desolation, so named because, as a result of all the sulfur and heat, very few things can live near the vents.  As you watch the next video, I encourage you to light some matches and sniff a bunch of hard-boiled eggs.

(Jia Lin is the name our Chinese friends gave her when we lived there)  Last up for videos is the clip of the actual Boiling Lake.  Off to the left in the video, you can actually see the hot water boiling up.  You can also hear the words slurring and sort of trailing off, since we were exhausted and only half-way through the hike.

Well, that’s all for now, peeps!  We’re back into the swing of things, so I should be able to blog once a week (or so).  For all the pics and vids from our hike, our move, and other various aspects of our time here, visit our ever-present, always-available photo album by clicking HERE and scrolling down.  Till later:

We are The Davidsons. While Jacelyn was attending med school on the Caribbean island of Dominica, we adopted three siblings (2 boys, 1 Girl). We will be living in St. Cloud, MN, for the next three years whilst Jacelyn completes her medical residency! Nic will be writing and doing his best to come speak wherever you are.
View all posts by Nic »
← Pineapples and Tony Danza
I Got A Fever! →