So, I’ve spent the last two days sitting in what is known as “The Fishbowl”, a large study room filled with tables and a silence fostered by something which my instructor at flight school called “The Pucker Factor” and which is caused mainly by the fear of imminent danger.  (There is far more fear in this one room on a daily basis than in my entire time in flight training.)  Jacelyn has her second major exam tomorrow morning and has been planted firmly in the same chair for days.  The Fishbowl gets its name from the two huge banks of windows found on either side of the room, but I also think it has a lot to do with the nearly complete lack of fresh air.  I took the following picture of The Fishbowl two minutes ago. 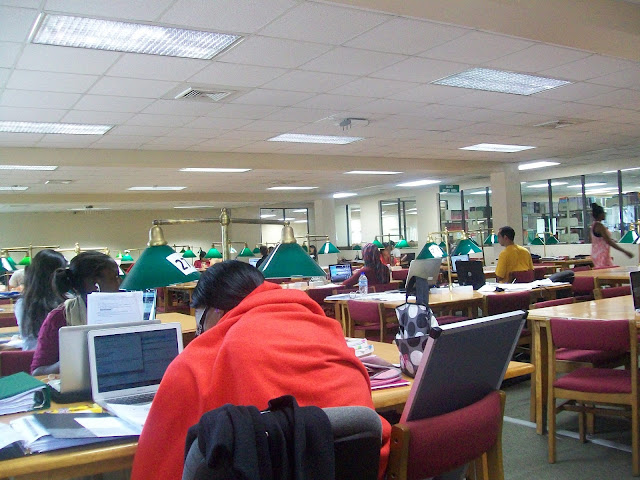 It has looked exactly the same for days. Same people, same hunched posture, same look of profound confusion.  And then there’s me, alternately blogging and trying desperately to beat my mom at Scrabble online.  One of these folks is definitely NOT like the other.

When we lived in China, it was always uplifting to see the various ways they would either “tweak” the English language in their advertising (we called it “Chinglish”) and how they would blatantly take things from the American market to use as their own(Red Berry vs. Black Berry).  Well, I’d missed that regular dose of hilarity, until I walked into James’ Store the other day.  Jame’s Store is a general store of sorts, where you can basically get what you need for your household in some form or another, most of it straight from good ol’ Chinaland.  While walking the aisles, I happened upon this box of computer speakers: 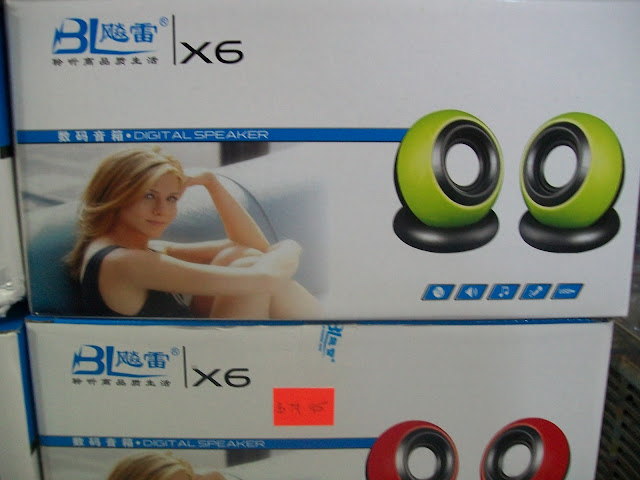 Yes, in case you’re wondering, that IS Jennifer Aniston.  No, I don’t think she knows that her image is being used to market cheap, immediately broken computer speakers.  Yes, I bought four boxes of the green because the marketing ploy worked.  No.  Just no.

Do you remember Phil and Sandra, the happy goat couple who lives out behind our house?  Well, they recently reached a milestone in their relationship: they had two kids! Oh, gosh, we were so happy for them.  We actually walked past them minutes after they’d been born! (I know this because I stepped on the still-soupy afterbirth)  So, they asked if we’d make their kids famous by posting them on our world wide web.  We did. 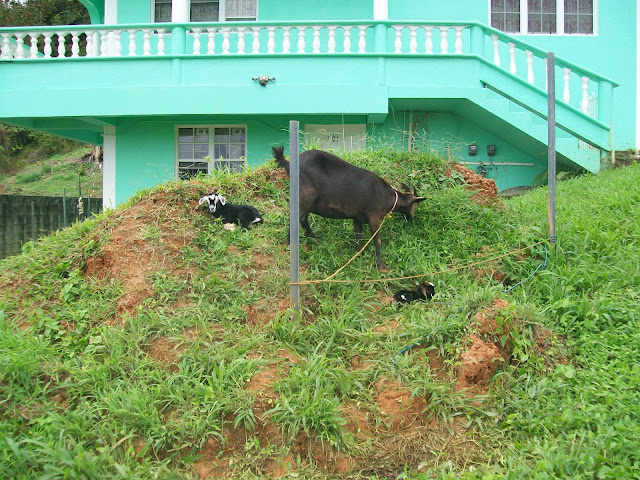 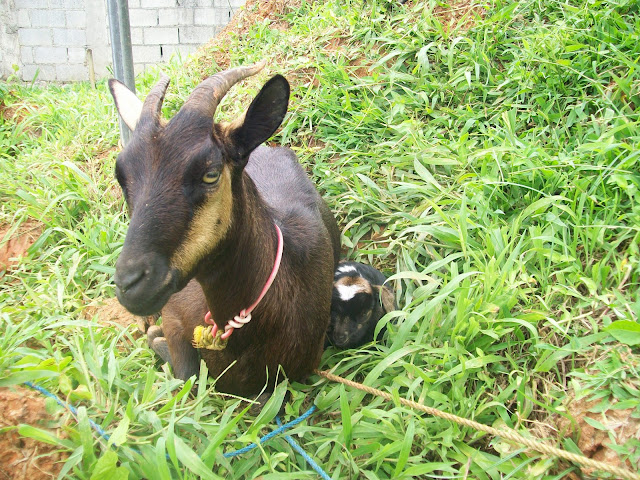 Apparently, in the goat world, it is good parenting to lie directly on top of the newborn, thereby teaching them to NEVER roam.  The baby goat on the left, a boy, they named Chester, “After Phil’s uncle.  He was  a sheep, but we loved him, anyway”, said Sandra.  The little girl kid on the right, they named Scram.  “I don’t know what we were thinking”, said Phil, “We’re gonna change it.”  I’ll keep you posted.

As I mentioned in our last blog, our buddy Johnny came to visit us for 9 days.  We saw many sites, ate many unique foods, and in lieu of forgetting the sunscreen, instead applied 9 bottles of Aloe.  One highlight of the trip was when he and I attended an hour-long class with Jacelyn one morning “about measuring clearance values to measure kidney function”.  Jacelyn seemed to like it, but I almost fell asleep just typing that quote from her on what the class was about.  Here’s a pic from that class. 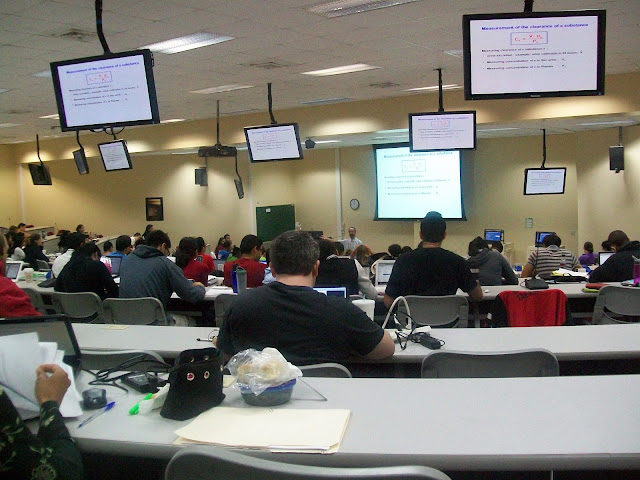 Johnny did really well during the class;  he kept his eyes on the screens, nodding every once in a while for effect.  I was good for the first 60 seconds.  Two minutes in, I was desperately trying to figure out what food that girl had brought.  I took this picture 5 minutes in, after which I remember nothing.  We did plenty of lying around and reading.  Johnny napped quite often, at which point I’d get out the camera.  Isn’t this a great pic, which I’ve NOT asked permission to post? 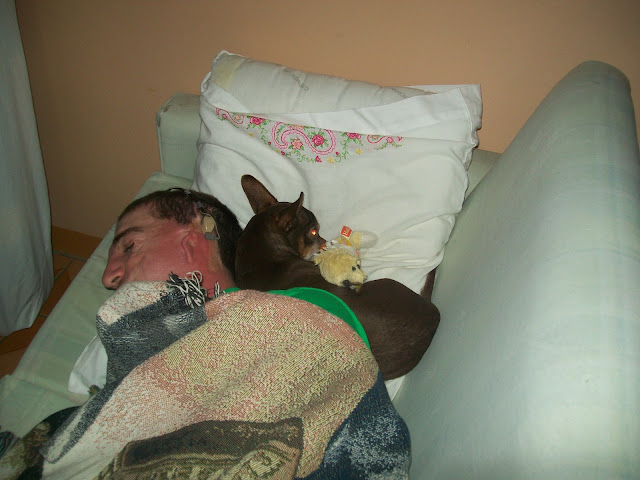 Like little angels, Johnny wrapped in a Wizard of Oz blankie and Burt, snuggle between his toy and his boy toy.  However, there WERE some low points.  Jacelyn gets pretty stressed sometimes and one night, while we were having fun posing with some souvenirs Johnny was buying… 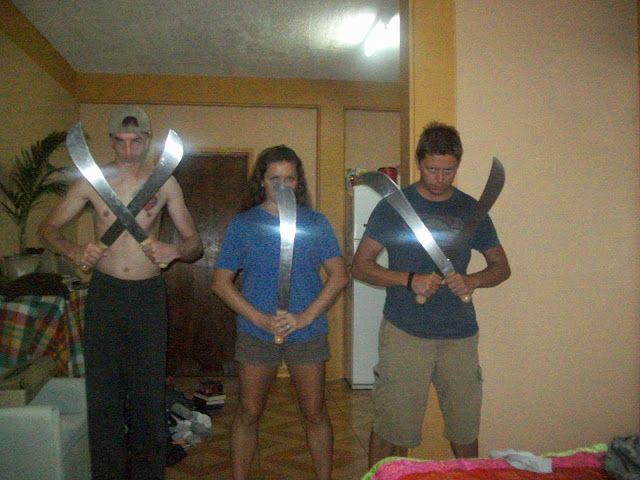 …one of us said something to contradict her in some way and….well…… 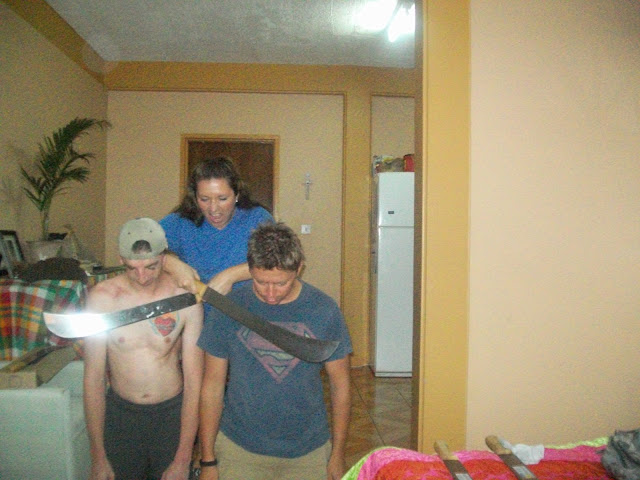 Sadly, that pic of Johnny and Burt really IS just his head.  She showed me mercy because she needs someone to continue blogging and cooking for her.

We are The Davidsons. While Jacelyn was attending med school on the Caribbean island of Dominica, we adopted three siblings (2 boys, 1 Girl). We will be living in St. Cloud, MN, for the next three years whilst Jacelyn completes her medical residency! Nic will be writing and doing his best to come speak wherever you are.
View all posts by Nic »
← Aspiring Airport Staff and Pricey Pigs
Sebastian, Zero: Spearfisher, Seven →