A Quick Word From The Lady…

So, two times this semester David and Goliath have come up.  Two teachers have presented different ways that scientists have thought Goliath might have died.  (Besides the obvious rock in his head.)    Neither of these completely fit with the Biblical account, but they are still interesting.  Apparently the neuroscientists didn’t consult with any theologians.  I simply like seeing people’s interest in the story!  The story of David and Goliath is so inspiring and such a testament to God’s power that people love thinking about how exactly it unfolded.

So, here’s the first explanation: 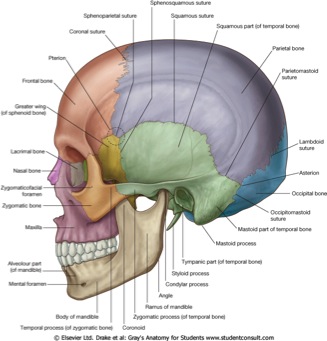 Look for the circled area on the skull above—it’s an intersection of skull bones known as the pterion.  Right under the pterion runs the middle meningeal artery.  This is also the thinnest area of our skull bone.  Therefore, getting hit here (say, with a stone) could relatively easily break the skull bone in that area—which could pierce the middle meningeal artery and cause blood to collect inside the skull (an epidural hematoma, to be exact)—putting pressure on the brain—which can lead to death in a matter of hours.   Now, the Bible says the rock hit Goliath in the forehead . . . and it didn’t take him hours to die . . . but you get the idea.

As for words from Li’l Nic, there are none this time. I’m busy showing my friend Johnny how to safely make it through a sea tunnel and end up in a sea cave.  You can safely assume that I will blog next week, though, if it’s any consolation!

We are The Davidsons. While Jacelyn was attending med school on the Caribbean island of Dominica, we adopted three siblings (2 boys, 1 Girl). We will be living in St. Cloud, MN, for the next three years whilst Jacelyn completes her medical residency! Nic will be writing and doing his best to come speak wherever you are.
View all posts by Nic »
← Adaptations In Sibling Quality Time
Aspiring Airport Staff and Pricey Pigs →