RSS Feed
← Insects and Their Concept of Boundaries
Why the long space? →

A Snowball’s Chance on Dom

Ladies and Gentlemen, welcome to the last week of Jacelyn’s first semester of med school!!!! It’s been a long journey, yes?  So many ups and downs. So many goats and cattle.  So many crazy, angry, elderly taxi riders hurling insults in Elvish.  So many days between posts.  I know that one of the most tenuous parts of your day is when you make the anxious trip across the web to https://nicandjacelyn.wordpress.com to see if your day will be filled with the vast sunshine of Dominican happenings or left gray and lonely because, alas, Nic flaked out on his responsibilities again. For today, anyway, your journey across Time and Space will pay off.  I wanted to say Thyme and Spice, but it’s too early in the post to use puns.

I’m truly sorry for the delay in posting.  There’s been a convergence of factors that has caused me to neglect the blog.  First, my camera has stopped working, so until I learn to use the “Paint” program really well on the move, we’ll be low on pics.  I know, I know, you’ll start saying, “But, Nic, just paint a picture with your words.”  To which I respond, “That is physically impossible and you’ll have to explain it a bit more creatively and in detail for me to understand what you’re getting at. If you could try to describe what you mean using creative imagery and well-placed adjectives, maybe we could get somewhere, hopefully the magical, elusive Land of Understanding, where truth blankets each breath like a Dominican Sunny Rain.” If any of you might know why my Kodak Easy Share camera keeps telling me my SD card is full when it isn’t, I’d greatly appreciate your expert advice.  For now, we’re at a higher elevation than where we want to be on this small river, but lacking any sort of tools to guide our raft.

Second, good gracious, have I become busy.  I have found myself booked with a steady stream of ministry opportunities in one form or another, which I LOVE, but which also drain my free/blog time.  In fact, I realized the other day that, since I’ve been on Dom, I’ve read like 11 novels.  I was initially confused as to how I could have read so much and still been so busy, until I realized that, in order to DO anything here, I have to walk for at least 6 hours.  So, to distract myself from the sweat that is making my backpack smell like my feet have smelled since coming here, I read my splendid, life-altering NOOK Simple Touch. (I’m serious. You should get one.  Not only can you get a lifetime of novels on it, you can also drag and drop PDF’s and pics, as well as finally have a valid excuse for walking into the back of parked vehicles all the time.)(To be clear, yes, I did actually walk into the back of a parked truck the other day)(In my defense…………….nevermind)

Third, we received an even larger amount of rainfall one day.  I’m not sure why, but whenever there is a lot of water, the internet for our entire area goes out.  Part of me thinks that the router or whatever makes the internet appear is strategically placed in the lowest point of some bowl-shaped valley with a roof over it, but not walls, so it keeps the light rain out, but not the torrents we get.  Either that, or it’s housed in a high field and, when it rains, all the cloven-hooved animals flock there and some self-centered animal, like Waldorf or Phil inadvertently un-plugs it while wandering over to the vending machine.  These are the only two causes I can think of.

We put up our Christmas decorations this week!  Here’s our front door: 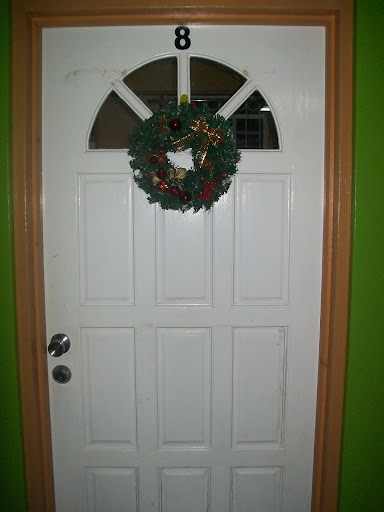 In Dominica, Christmas is represented by a black number 8.  (When in Rome, I guess)  And this is the inside of our apartment:

You may think we went overboard, but we’re just trying to keep up with the locals. Look at downtown Portsmouth:

They even lay train tracks each year for the occasion to remember how the wise men could’ve brought a bit more myrrh if they’d bought a EuroRail Select Pass. (The Dominicans overlook NOTHING)

The other day, I defrosted the freezer (a first for me).  When all was said and done, I was really glad I did it, because it reminded me how I don’t miss the climate in Duluth.  (Of course I miss the PEOPLE.  Seriously, did you have to even think that?  I validate you. You are important. You matter.)(It’s just harder to notice you through the blinding snow and frozen eyelashes)  Anywhoooo, I had this when I finished: 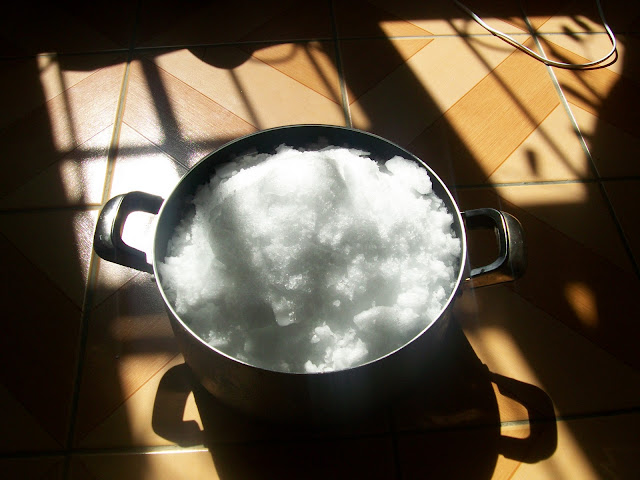 Which I then took outside and filmed THIS.  The video is so short and impersonal because that was when the camera really started going and it would only let me film like 11 seconds.  When I got done throwing snowballs at birds on the telephone wires, I looked across the street and a lady and her daughter were just staring at me, probably wondering what it is that makes these Americans SO angry that they have to freeze water and throw it just to get release.  I also dumped some on the lawn so you could see how out of place snow feels here: 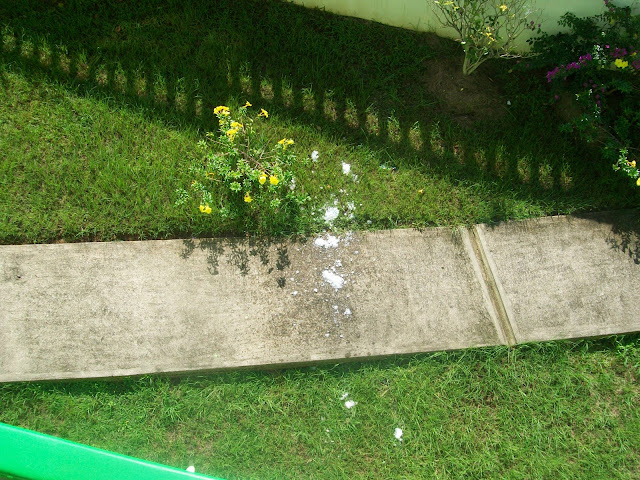 We received a barrel from all the wonderful people at the church down in Coleman, FL, where Jacelyn’s dad is the pastor.  It was so full of supplies and wonder that the guys who were bringing it to me made me take a bunch out before they’d carry it up.  It was like opening a time capsule that had been sealed by people from an ancient civilization who hoped someday, somewhere, people would need non-perishable food supplies, toilet paper, and scented lotion from what was then probably called “Bathe & Bodee Werks”.  It was so amazing!!!  Thank you, civilization with brilliant foresight!

I’ll close with a few medical tidbits for the week.  Did you know that the human body contains around 5 Litres of blood and, every minute, our heart circulates all 5 Litres through it?  Crazy, yeah?  Like Hamlet said, “Here’s fine revolution; and we had the trick to see it.”  As I said above, she is in her last week of her first semester of med school.  What this means is tests, tests, and more tests.  She had one on Thursday, two on Friday,has one major test tomorrow and then the final, which is around 45% of her grade, next Monday. It’s crazy to think that a whole semester has passed so quickly.  Also, her test on tomorrow is all about the heart and the lungs. Were you aware that very time the heart beats it replenishes the whole amount of blood that is in the lungs?  Which brings me to my closing factoid.

You know, I’m sure, that the lungs put oxygen into your blood stream.  You are now aware that every beat of the heart brings new blood into the lungs to be oxygenated.  Well, Jacelyn learned recently about something called the “Valsalva Maneuver”, which is when you strain, making the motion inside as if you’re exhaling, but you’re not breathing out.  It is not good for you to do repeatedly, because, though you’re pushing and forcing and your heart is still pumping blood, you’re not breathing, so your blood is not getting any oxygen.  That’s why weight lifters are told to exhale when straining.  Now, you’re probably thinking that, since most of us aren’t weight lifters (other than the occasional can of pop or snow shovel), this maneuver would have very little relevance to your life; however, I was most interested to find out another area in which we ALL use the Valsalva Maneuver.  In fact, it is likely that, while you’re reading this, at least one of you are using the maneuver right now.   Yes, that’s right, we most often use the Valsalva Maneuver when we’re defecating (though, I prefer to use the term “going number poo”).  Why is this interesting to me?  Well, now we can all share a code word with each other.  We no longer have to say awkward things like, “I’m just gonna excuse myself for a moment” or “sorry it took so long, but I was having digestive issues” or “I’m so sick of explosive diarrhea”.  You can now simply look at your phone, as if you received an urgent text, and say, “Excuse me, I have to perform a Valsalva Maneuver.  I’ll be right back” or “They need a Valsalva Maneuver STAT” or sorry it took so long; luckily I was saved by the Valsalva”.  In fact, instead of the creepy old “BM”, you can now spice it up and add intrigue by saying “VM”, instead!

Yes, here at nicandjacelyn.wordpress.com, you don’t just learn about the world and medicine; you learn how they relate to each other.  You’re welcome.  Now, if you’ll excuse me………I have an interview with a Mr. Valsalva.

We are The Davidsons. While Jacelyn was attending med school on the Caribbean island of Dominica, we adopted three siblings (2 boys, 1 Girl). We will be living in St. Cloud, MN, for the next three years whilst Jacelyn completes her medical residency! Nic will be writing and doing his best to come speak wherever you are.
View all posts by Nic »
← Insects and Their Concept of Boundaries
Why the long space? →