RSS Feed
← Love, Heartbreak, and Grammar Games
Insects and Their Concept of Boundaries →

If the Fellowship of the Ring Took Local Transportation

Sometimes life moves too quickly.  We get so caught up in all of the things we have to do that we never just stop.  And even if we do stop, we’re still preoccupied with smelling roses and counting blessings (the checklist never ends).  However, Jacelyn found out in class the other day that it’s dangerous to actually STOP moving.  It turns out that if you stand completely still, as in absolutely motionless (no wiggling of toes, fingers, anything), for 5 minutes, you will faint.  You see it all the time in weddings, choirs, and in the military.  This happens as a result of two phenomena.  The first is that, when you’re in the standing position, your blood tends to gravitate (literally) in the lower part of your legs.  It is basically the flexing and un-flexing of your muscles that forces the blood out of the lower extremities back up towards the brain.  So, it follows that if you stand completely motionless for long enough, there ceases to be enough blood flow to your brain, resulting in a blackout.  In and of itself, that would be bad enough, but that’s not all, folks.  Add to that something known as a “vasovagal response”.  In short, when a person is in a stressful situation, the body responds and slows the heart rate down, thereby slowing the pumping of already sparse blood supply to the noggin.  So, let’s put this into context, shall we?  You’re a groom/bride.  This is one of the pivotal days in your life.  This is the beginning of an amazing journey. PLUS, if you’re the groom, your whole outfit fits wretchedly, or, if you’re the bride, this is the best-fitting outfit of your life and you don’t want to screw it up.  Then, you stand PERFECTLY MOTIONLESS for 7 hours straight while the other person professes their love.  It’s a recipe for face planting and there’s an awesome video of it, which her professor used in class, right HERE.

Next up, another example of smart people making things more difficult for us Streeties (a term I’ve coined, which combines “street people” with the candy “Smarties”).  Jacelyn recently got to go to a lab where the Smarties (a term I’ve coined, which combines “smart people” with the 80’s sitcom “Family Ties”, because Alex P. Keaton was brilliant) got to learn how to correctly use and interpret the results of a Sphygmomanometer, which can be complicated, I’ve heard.  What exactly IS a Sphygmomanometer?  Here’s a picture of the box it comes in: 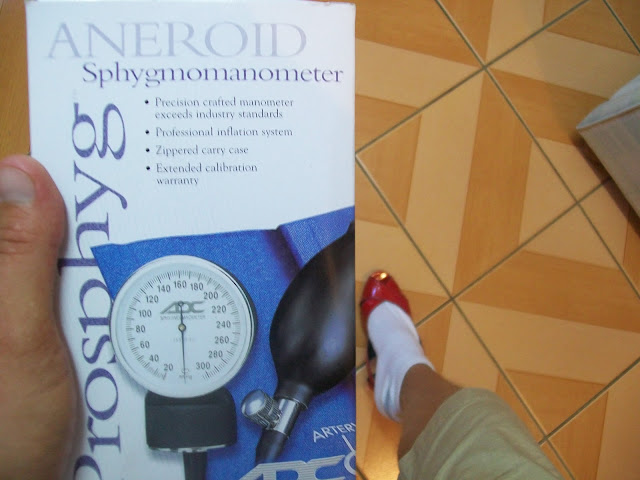 Really?  Really?  I know so few of the words on this box.  Why not call it something easy, like “Blood Pressure Takerization”?  I’m putting this box on the “Reasons I’m Not Trying To Become A Doctor” list.

Animals.  Let’s talk about animals, shall we?  First off, Jacelyn and I were laughing this afternoon about how we ended up with our Chihuahua, Burt Reynolds.  My mum bough him as a gift for us a month after we got married, ten years ago. (Yes, ten years.  I know.  The old married couple.  We’re just waiting to die, now. Just plodding through.)  Anyway, when we were driving to the seller’s house, we agreed on two things: we wouldn’t take the first dog we looked at that day and we wanted a girl.  We walked in to Burt’s house, they handed Burt to Jacelyn, Burt licked her face, mum bought Burt.  Easy as pie.  That memory just made us laugh and, since I have a capitated audience, I thought I’d share it with you.

So, Waldorf and his posse’ made an appearance on Monday.  While at the coffee shop, I was able to get some GREAT footage of him and his “lady friend” out on a stroll.  I don’t yet know how to embed a video on wordpress, because the Smarties at WordPress named it something like Xeolophlasticvideoantristoln Embedostoflinkct; but, for one of my favorite Domini-cow videos, click HERE.

On Tuesday, Jacelyn and I made the trek to Roseau for me to get some dental work done, meet with Mrs Mahalia Paul, and get Christmas decorations at 50% off.  Two events stand out from the trip.  First, I am finding a weird balance between slow, seemingly-lethargic, borderline-fainting, “I slept, ate, and had a bowel movement while you were getting that Coke for me” Island Time and “Whoah, let’s slow it down a bit there, Sport; I’m trying to have a bowel movement and I’ll be out of the stall soon enough” Speedy Time.  (Speedy time is a term I’ve coined combining things that don’t pertain to you).  In the one trip, we saw both sides of that long, wordy coin.  First, I went to the dentist to get a filling.  My appointment was at 10 and I waited until nearly 11 for my name to be called (which they had in their system as James Davidson) (maybe they didn’t mean me, but I took Jimmy’s spot with a clear conscience).  So, I’d waited like 50 minutes to be called.  The appointment, however was less than 15 minutes, I think.  They called me, ordered me to lay down, went to town on a random tooth, beamed a purple laser in there, and said thanks.  Literally, crazy crazy timing.  I paid them.  I’m not sure if they did anything, but I paid them.  So, there we have Island Time AND Speedy Time.  Also on the coin was being able to get an abundance of Christmas decorations for like $36 vs. getting in the transport van to go home and waiting 30 minutes in the heat for it to fill up before he’d move.

Which brings me to the last story of the day.  About halfway through the transport ride home, we began to notice an elderly woman yelling behind us in the van.  She was quiet at first, and it seemed like she was arguing with some younger girls about something.  She got quite loud a couple of times.  Jacelyn and I were in the front seat, me in the middle.  So, when we finally arrived at her stop, she got out of the van, yelling all the while.  It was then that we realized she was quite crazy.  She had the crazy, “I never quite look at anything” eyes and the “I’m gumming a mouthful of coins” lips.  She prepared to pay the driver by reaching across us to give him the money.  He didn’t seem to be paying attention to her, so she yelled what has now become one of my daily mottos.  Like a crazy female Gandalf at the end of his stress rope, she yelled, “STRETCH OUT YOUR HAND!!!”  When he did, she placed the money in his hand and squeezed his fingers very very hard and said, “HOLD IT TIGHT!!!!!”  Here’s a video of me re-enacting the scene, because you have to hear it to really grasp it and hold it tight.

We are The Davidsons. While Jacelyn was attending med school on the Caribbean island of Dominica, we adopted three siblings (2 boys, 1 Girl). We will be living in St. Cloud, MN, for the next three years whilst Jacelyn completes her medical residency! Nic will be writing and doing his best to come speak wherever you are.
View all posts by Nic »
← Love, Heartbreak, and Grammar Games
Insects and Their Concept of Boundaries →