RSS Feed
← Like A Crabsicle on the 3 of November
Love, Heartbreak, and Grammar Games →

The Oracle Has Groggily Spoken

These last few days have provided Jacelyn with some VERY interesting experiences.  She is spending this whole week learning about the heart, and keeps expressing how amazed she is at the intricacies and complexities of our bodies.  For example, yesterday she had a lecture about the impulse that travels through the heart, telling the heart muscles to contract.  The professor also spoke of when the blood is in different chambers of the heart and when the different valves open.  That seems easy enough to us “street folks”, but to get an idea of the pace and amount of content these Crazies usually encounter in any given lecture, do this:  Picture standing before a small auditorium of 5-year-olds, asking them to tell you about tigers, jell-o, and dirt, and then trying to take notes on EVERYTHING they say.  Anyway, at the end of the lecture, the professor said, “There.  We just spent 45 minutes going through something that happens in .8 seconds in your body.”  Yes, readers, all of the prior info, the entire class period, was what happens in one heartbeat.  Insane?  Yup.  On all counts.

Next up on “Fun Jacelyn Days”, I give you a transcript of a very short conversation we had this morning:

(While reading a favorite science web site, I came upon a name I didn’t recognize.)

Nic: “Hey, have you heard of Avogadro’s Number?”

That was  it.  If you’re not getting how nuts it is that li’l Jacelyn Davidson can spout off that sentence while putting on eye liner, you NEED to read the transcript again.  Next, while I was away on Saturday, Jacelyn was studying at home and felt the whole apartment shake.  She found out on Monday that it was a tremor, or, as I like to call it, “a massive earthquake”.  After she crawled from the rubble, or, as she likes to call it, “Looked around”, she went back to studying like a good Crazy.

The last Jacelyn tidbit is one that I am going to mark down as one of the top 3 weirdest things she’s ever done in the twelve years I’ve known her.  A little set-up is necessary.  Jacelyn is a very heavy sleeper and it is usually difficult to wake her up.  Quite often, when she’s a bit overtired, the wake-up process goes from “Difficult” to “I Feel Guilty Pulling Out Yet ANOTHER Toenail, But Nothing Else Works”.   And once in a while, when all the components come together, I get to experience what I have termed “The Perfect Mumble”.  As she is in that state between dream and awake, she will sometimes begin talking.  I’ve always chalked them up to random nonsense with no psychic or spiritual properties to them at all.  That is, until yesterday.  Yesterday morning, the stars had aligned, I shook Jacely to wake her up, she stirred, rolled over, and said:

“All hatred will be spread through you.”

What do I do with that?  Has the oracle spoken, like some fantasy novel where I’ve just realized that I’m destined to be Lex Luthor or The Joker or Bob Barker?  Hours later, when she was finally fully awake, I asked her about it.  She’s really unable to put the jumble of feelings she was having into a concise picture, which is fine.  If you ask me, “All hatred will be spread through you” is articulate enough.

In other, less demonic news, I got to spend all of Saturday at a retreat center up in the hills outside of Roseau, speaking about Theology of the Body to a group of young adults.  Not only was the setting gorgeous (1,500 feet above the Caribbean Sea), but the people attending the retreat were kind and fun and I had a great time.  I learned many ways in which I am constantly mis-pronouncing things here. (Although, I MUST point out that there seem to be 23 different ways to pronounce that red blossom that I made juice out of)

While I was meeting with the youth director, Mrs Mahalia Paul, in Roseau last week, I saw a bunch of pre-schoolers walking somewhere and, since it has been Creole Days, the kids were all decked out.  I think one of them was even carrying a crowbar.  I bet I know where his mom shops. 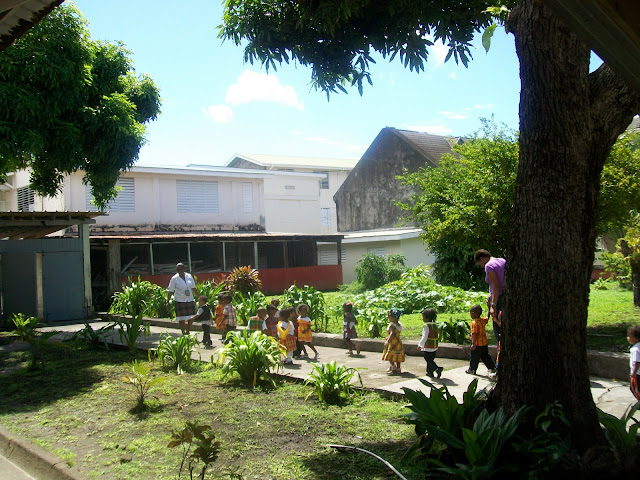 I know Im obsessed, but I keep trying record the odd phenomena of sunny day rain storms that we get here.  HERE’S a video of me trying to catch it.

I tend to be a hard worker, not in the sense that I necessarily work hard, but that I like to say I have a strong work ethic.  I often get criticized for not taking enough time to relax and pay attention to the things that really matter, like family, friends, laundry, dishes, making ice, etc.  It’s hard for me to explain to people what it is inside of me that spurs me on, what makes me go and go and go.  Then, while I was looking back over the 420 pictures we’ve taken so far on the island, I found one that exemplifies why I keep on keepin’ on.  It’s because I see these eyes looking at me all the time, silently telling me, “Don’t you think you should get up and do somethin’, man?” 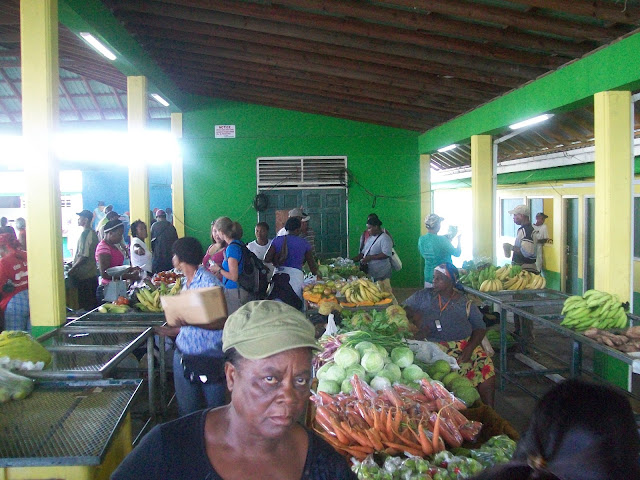 Burt Reynold’s has been doing well here.  The only odd thing I’ve notice, lately, is that no matter WHEN I turn to look at him, he’s ALWAYS poised and staring at me.  I’m not sure why this creeps me out.  It probably has to do with him being able to sense all the hatred in me.

We are The Davidsons. While Jacelyn was attending med school on the Caribbean island of Dominica, we adopted three siblings (2 boys, 1 Girl). We will be living in St. Cloud, MN, for the next three years whilst Jacelyn completes her medical residency! Nic will be writing and doing his best to come speak wherever you are.
View all posts by Nic »
← Like A Crabsicle on the 3 of November
Love, Heartbreak, and Grammar Games →